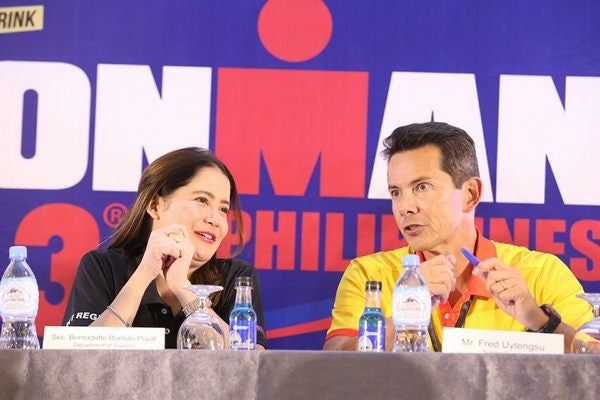 In the Meet the Pros press conference yesterday at the Marquee of Shangri-La’s Mactan Resort and Spa, Uytengsu, who has been organizing this event for the past decade, has never seen this stacked line up of pro triathletes in one race.

“[They are] the absolute best cast of triathletes which can be compared to a world championship,” said Uytengsu, who was joined in the press conference by Department of Tourism Secretary Bernadette Romulo Puyat, Lapu-Lapu City Mayor Paz Radaza, and World Triathlon Corporation CEO Geoff Meyer.

Asia Pacific Championships defending champion Tim Reed of Australia leads the list of pro participants. He believes the cast is indeed a talented one but he is ready for the challenge ahead.

“The presence of these great triathletes brings in different dynamics to the race. It’s almost that with this many pros, it’s going to be tough to come up with a race strategy because there’s too many things to prepare for,” said Reed, who is also the champion of last year’s Ironman 70.3 Philippines. “So, I am going back to the simple strategy of looking what I can do and focusing on the start and go to the finish line as fast as I can.” said Reed

They will be part of the 2,571 triathletes seeing action tomorrow.