Once again: Stop the killings 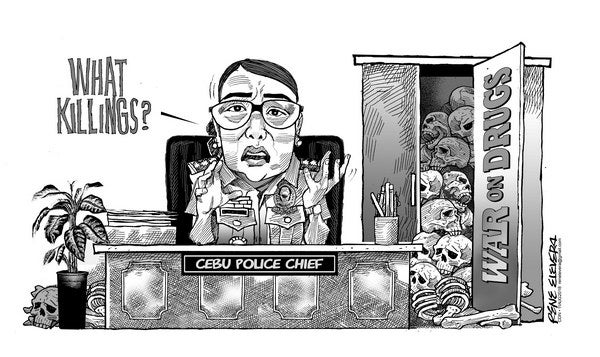 While Cebu City Police Director Royina Garma insists that public perception of strife and discord in her area of jurisdiction is nothing but the fruit of malicious mind conditioning, her opinion is counterfactual.

“I appeal to people, especially to our leaders, to not make the city appear as if it’s a dangerous place,” Garma said.

Let us return to the tragic death of Bladen Skyler Abatayo, 4, who was felled by a stray bullet amid a bungled police operation in Barangay Ermita, Cebu City, in the middle of July.

Let us assume that Bladen Skyler had been the only casualty of the government’s anti-narcotics drive in the city.

Now, let us count the number of people who had been robbed of their peace of mind because of the untimely perishing of the boy.

Count his father and mother, who have had to bury their son. Count Bladen Skyler’s relatives.

Count his neighbors who continue to cry for justice.

Count every mother and father who is raising an infant and who no longer feels safe because a stray bullet from out of nowhere might hit his or her child anywhere.

If the bloody killing of one boy has been enough to upset the tranquility of an entire community and to plant a sense of uneasiness and fear among many, are Cebuanos to blame if they conclude based on dozens of recent deadly shootings that Cebu City is no longer peaceful?

Is it fair to dismiss as false perception the image of Cebu as violent when this also stems from the unsolved status of most if not all of these killings?

If law enforcers are so invested in building the image of a peaceful Cebu, they ought to remember that they will succeed not by engaging in the amateur public relations work of belittling the violence but by clearly demonstrating that crime does not pay.

That means investigating the recent killings, especially of persons accused post-mortem of involvement in illegal drugs. That means bringing the perpetrators posthaste to justice.

Our policemen and women do themselves no favor when they blacken the name of people after they have been executed (definitely not when at least one policeman has been credibly alleged to have been a bonnet-clad hitman).

To accuse one who is no longer around to contest an accusation is a mark of the savage.

To pretend that a city is at peace when dozens of families are mourning the slain is a mark of the callous.

Read Next
THE PETER LIM BROUHAHA