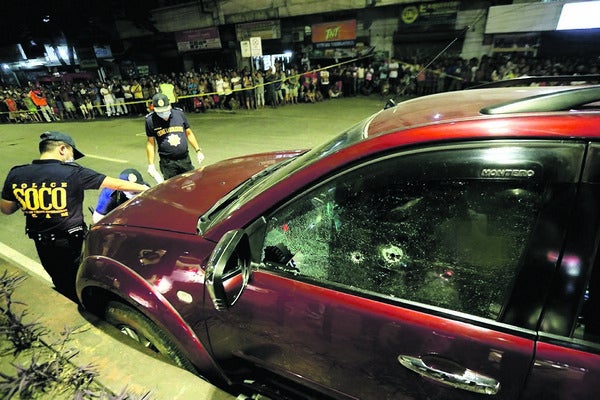 A 71-year-old businesswoman has become the latest victim in the spate of killings in Cebu.

Junko Hamada, the president of Beams Philippines Export Corporation in Talisay City, was shot dead by two unidentified assailants riding-in-tandem on a motorcycle while she was driving her Montero sport utility vehicle along N. Bacalso Avenue in Cebu City at around 7:30 p.m. on Friday.

She suffered a gunshot wound on her head.

Senior Insp. Dexter Basirgo of the Mambaling Police Station said Hamada might have been on her way home to Barangay Capitol Site in Cebu City when the assailants fired at her.

As of 10 p.m., personnel of the Scene of the Crime Operatives (Soco) were still processing the crime scene, hoping to find evidence that would lead to the identification of the suspects.

Basirgo, in an interview, said they were conducting an investigation to find out the circumstances behind the killing of Hamada.

“We were looking for footages of closed-circuit television near the crime scene so we would have an idea as to how the two assailants looked like,” he said.

Witnesses have told the police that the two perpetrators were wearing face masks and helmets to conceal their identities.

“Apparently, the backrider and the gunman was a woman because of her long hair, as narrated by witnesses,” Basirgo said.

He said they were looking into all possible angles behind the slay of Hamada.

Based on its website, Beams Philippines Export Corp. was described as an exporter of high quality furniture and home decorations made of natural materials such as wood, stone and wires and iron.

Its factory, established in 1995, is located in Barangay Dumlog, Talisay City.

While her name was Japanese, Hamada was identified in her driver’s license as a Filipino citizen.

Her Facebook page had no other information except to say that she worked for Beams Philippines and that she lived in Cebu City.

Cebu Daily News tried but failed to reach officials of the Cebu business community for comment.

In a tally made by CDN, at least 131 persons were killed in shooting incidents in Cebu over the last seven months.

Hamada was the third person who ran a business and the ninth woman to have fallen victim to the series of murders that have hit Cebu since early this year.

Most of these killings have remained unsolved.

Read Next
Ombudsman orders 6-month suspension of top 3 officials of Barili, 2 others