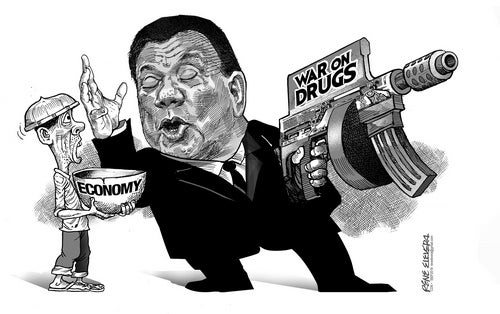 Trying to convince President Rodrigo Duterte to leave the war on drugs entirely to the Philippine National Police (PNP) and focus instead on the economy is like asking him to forget about Sen. Antonio Trillanes IV and work with the political
opposition.

It simply cannot be done if we are to go by President Duterte’s repeated pronouncements on his determination to rid the country of drugs which are often laced with expletives for added effect and emphasis.

By now, every Cebu-based netizen already watched on repeat mode President Duterte’s tirade against Cebu City Mayor Tomas Osmeña concerning his war on drugs and that latest episode leaves little doubt about how stoked he was and continues to be when it comes to waging his relentless campaign.

When it comes to the economy, the President practically abandons it to his economic team, who enjoys his full trust and
confidence amid the surging prices of basic commodities, the rice crisis, inflation and so on ad nauseum.

When it comes to dealing with economic problems, the President seems to find it as exciting and relevant as watching paint dry in the sun.

He believes that his Train (Tax Reform For Acceleration And Inclusion) law as mapped out by his experts will boost the economy without resulting in higher prices caused by taxes on fuel.

Only when the surveys come in and reflect public restlessness on rice prices and so on does he sit up and pay attention, ordering agencies to carry out palliative measures like increasing allocation to hard hit regions and leaving long-term planning to his subalterns.

But what do Lacson and other lawmakers not necessarily aligned with his administration expect of the President, whose concept of economic matters and solutions to economic problems is confined merely to copying the proposals of his political rivals?

It’s the war on drugs above all else for President Duterte and he has zero tolerance for any critical of his campaign even those who even copy his style of violent reprisal on drug suspects and errant law enforcers caught dealing in drugs.

The closest attachment the President has to anything connected with the economy is mass transport and telecommunications as well as tourism (as seen in his Boracay harangue) and mining.

In these issues, the President’s adamant stance resulted in swift and decisive action that not all Filipinos may agree with and
support but which had produced concrete results.

Unfortunately these instances are few and far between with the war on drugs being above all else.

TAGS: above, All, else