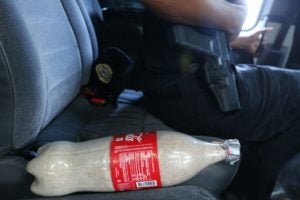 This is the dud improvised explosive device (IED), which was found outside the Infinity KTV Bar along Archbishop Reyes Ave. in Barangay Kamputhaw, Cebu City on Saturday.

According to Supt. Ryan Devaras, chief of the Investigation Detective Management Branch of the Cebu City Police Office, the employees of the establishment are not cooperating with them.

A motorcycle-riding tandem threw an improvised explosive devise (IMD) at the entrance of the massage parlor just after midnight (early morning Saturday), which destroyed the glass walls of the establishment.

Just minutes later, another IED was thrown at the Infinity KTV, owned by Lim and his brother Wellington. The device, however, failed to explode.

Devaras told Cebu Daily News that a few hours after the incident, he instructed his men to proceed to the area to get information about the incident but his investigators failed to get the name of the owner of the establishment, especially that the business documents, such as the business permit, were no longer in the area.

“They (employees) are not cooperating that is why we are still blank on the identity of the owner but we will find look for other sources,” Devaras said.

Devaras said they will coordinate with the Office of the Building Official to find out the name of the person who had built the building.

The police is also searching for CCTV cameras that might have recorded the incident to see if they can identify the suspects who lobbed the IED on the building.

They also want to know if the suspects are the same persons who threw the dud IED at the Infinity KTV bar.