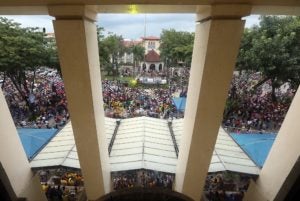 Yesterday’s celebration of Osmeña Day was unprecedented in that there were three separate events.

The first was at 7:30 a.m. at the Osmeña Marker along Osmeña Boulevard, which started with a Mass and a program. This activity was the official celebration of the Cebu City government and was attended by top city hall officials and members of the Osmeña clan.

The BOPK activity was a Thanksgiving Mass for the gains of the Cebu City government under Mayor Tomas Osmeña, while that of the Barug Team Rama-PDP-Laban was a Solidarity Mass in support of President Rodrigo Duterte’s war on drugs and to support the police in its anti-criminality campaign. (See separate stories.)

Osmeña Day is the yearly commemoration of the birthday of the late Cebuano President Sergio Osmeña Sr. and yesterday’s celebration was for his 140th birthday.

Respect
Minnie said her grandfather was a man of principles and high standards.

“I find it a big responsibility to live up to his name,” said Minnie.
Minnie, Mayor Tomas, and Senator Serge Osmeña are the children of the late Cebu governor and Cebu City mayor, Sergio “Serging” Osmeña Jr.

Minnie also honored their father, Serging, during the event.

“When my father started the first reclamation project, I asked him why he was doing it. He answered, ‘the city has to become larger.’ That’s why the reclamation has started,” Minnie said.
Minnie also expressed gratitude to the support that the people have given their family.

“I know that we will always have your respect and that is the most important thing for me and my family, for my father and grandfather,” she said.

“Nakahatag siya og dako nga contribution sa atong Sugbo, sa atong syudad. (She has given a huge contribution to Cebu and to our city.) She is an encouragement to the youth that they can be the best,” said Cebu City vice mayor, Edgardo
Labella.

Labella said that the other medalists will be given recognitions as well in due time.

Mayor Tomas recognized Didal as a rare Cebuano pride that could encourage the people.

“It is very rare that we become proud of being a Cebuano. She is a source of inspiration,” Mayor Tomas said.

Gratitude
Didal said that she is thankful of the support of the Cebu City government.

“Dako kaayo nga tabang gyod ang nahatag sa Cebu City sa amoa. (The city has helped us a lot),” said Didal.
Didal also expressed her excitement over the skate park that the city plans to build, which she said can help skateboarders in the city.

“For six to seven years, I struggled to practice in the streets,” Didal said.

The proposed skate park will be built at the South Reclamation area.

Didal also promised to bring more wins to the country in her upcoming competitions.