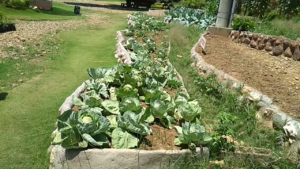 In a place where traffic collides in the middle of a busy intersection in Mandaue City, you will find a haven of greens.

The vibrant display of nature on a triangle shaped piece of land along Barangay Ibabao-Estancia is not just good for the eyes.

Its builders say that it is also a treat for the tummy as sunflowers, green herbs, a greenhouse garden and inland fishery thrive in the 3.6 hectare site.

The Mandaue City Agri-Eco Park and Technical Demonstration Center, located along MC Briones street, is bordered at its west by the national highway, R. Colina Street at its south and at its east by S.B. Cabahug Street.

U.N. Avenue, the city’s main thoroughfare, is just a few meters away from the park’s northern tip.

“We are used to the conventional landscaping scheme where we only use ornamental plants. But now, here comes edible landscaping,” said Mandaue’s assistant city agriculturist Sharon Mangadlao.

“We landscaped the area with vegetables and herbs – plants that we can actually eat and make use of and not just for visuals,” said Mangadlao.
Nipa huts were also built in the area along with wooden benches surrounding big trees that already grew at the site prior to its development, so that visitors could sit comfortably under the shade.

“We did not cut anything here. We only enhanced and beautified whatever tree that existed here before” said Mangadlao.

The park, cultivated and managed by the Mandaue City Agriculture Office, was launched in December 2017.

Soon, students from nearby schools found themselves studying there while enjoying the hushed, breezy environment of what used to be no more than an idle swamp where dilapidated vehicles were dumped.

Part of the marsh is now planted w 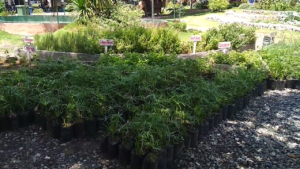 Less than a year after it opened to the public, Mandaue’s so-called “edible landscape” now draws hundreds of Mandauehanons like Teresita Melencion, a resident of Barangay Paknaan, who takes quiet strolls with her two sons, aged 5 and 2 years old, at the park daily.

Elementary and high school students from public and private schools around Mandaue City also go on field trips at the park.

At the western perimeter of the park, visitors are drawn to the breathtaking view of sunflowers and colorful orchids, in full bloom.

“There are some sunflowers that have withered, their seeds will be replanted by the personnel from our office,” said Mangadlao.

At night, the park is illuminated by solar powered LED lights that give visitors a sense of security.

The fish waste provides an organic food source for the plants, while the plants naturally filter the water for the fish.

“We built a fish pond for what we call inland fisheries. At the same time, we have Aquaponics culture where the plants and the fish develop a symbiotic relationship,” said Grace Go, Mandaue City’s supervising agriculturist.

“We’re showcasing different technologies within the area. One of which is the tilapia culture, the second is the herbal garden and our greenhouse where we also provide farming training for our job order employees,” Mangadlao, for her part, said.

Due to its success, the park’s greenhouse project has been replicated in two other barangays, Tabok and Subangdaku, with each allocating P200,000 for the training of personnel and P300,000 for their greenhouse facility.

The popular ‘umbrella plant’ is also cultured in the herb garden potentially to help in the rehabilitation of the city’s Butuanon River as Mandaue hosts the International River Summit this November.

“In the process, we are planting umbrella plants because according to a research in a university here in Cebu, the umbrella plant is good in absorbing heavy metals present in water,” Mangadlao explained.

Inland fisheries
Last January, the park’s fishpond had its first stock of red tilapia fingerlings provided by the Bureau of Fisheries and Aquatic Resources in Central Visayas (BFAR-7).

Six months later, 109 kilos of red tilapia were harvested from the pond and sold to employees of the Mandaue City government.

“Actually, not all the fingerlings injected in the first run survived because we were still studying on how to do it right. Some died due to the water, and then we came up with the filtration using available plastic drums so the water quality improved and we saw that the fishes started to survive,” Go said.

The demand for the red tilapia was overwhelming so much so that the pond’s supply only lasted for two days.

Fifteen thousand pesos in proceeds from the sale of the tilapia were given to Cebu’s Bantay Dagat Task Force for the livelihood project of its members.
Later this month, city agriculturists plan to start the second run of tilapia fingerlings.

“What we would like to point out is that even if we are living in a highly urbanized city like Mandaue, agriculture still exists,” Mangadlao said.