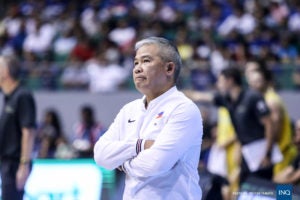 IT LOOKS like coach Yeng Guiao will be handling Gilas Pilipinas for a longer time — perhaps even permanently.

National coach Chot Reyes announced late Tuesday night that he was stepping down from his post as chief mentor of Gilas Pilipinas and will focus on building the team for the 2023 World Cup that the country is hosting.

Reyes cited the PBA’s latest decision to provide the national team with a buffet of players as part of the reason why he decided to move on and focus on his different duties under the Manny V. Pangilinan group of companies.

“Now that the PBA has opened its doors fully to the SBP and the national team, it is time for me to step aside and contribute in a different capacity, focusing on the 2023 program,” Reyes posted on his Twitter account (@coachot).
Reyes had two stints at the helm of Gilas Pilipinas. His first stint ran from 2012 to 2014 before returning and taking Tab Baldwin’s spot in 2016.

Under Reyes, the Philippines won the silver medal in the 2013 Fiba Asia Championship and booked a ticket to the 2014 Fiba World Cup, a first in 40 years.
But while Reyes had a lot of success with the Gilas program, his coaching tenure had been beset by several controversies too.

Under him, the Philippines dropped to its lowest finish in the Asian Games when it placed seventh in Incheon in 2014, a stint remembered for Gilas Pilipinas shooting at Kazakhstan’s goal as it chased quotient.

Reyes was also the head coach of the national team when it scuffled with Australia during their World Cup qualifying match on July 2 at Philippine Arena in Bulacan, a brawl that actually opened the window for Guiao on the Gilas bench.
With Reyes fined heavily and suspended for that brawl, Guiao was tasked to handle Gilas Pilipinas for two Fiba qualifying windows.

Guiao earned that shot after whipping a two-week-old squad reinforced by NBA standout Jordan Clarkson just five days before the tournament into a competitive team that finished fifth.

Read Next
Slaughter left out of PH roster because of injury