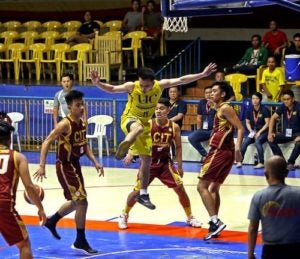 Lancers on a roll with third straight win; Webmasters still unbeaten for the season

The University of the Visayas (UV) Green Lancers and the University of Cebu (UC) Webmasters gained victories over their respective opponents to head to their mammoth-sized match-up tomorrow with a lot of momentum in the 2018 Cesafi men’s basketball tournament on Thursday evening at the Cebu Coliseum.

The Webmasters went through some anxious moments in the fourth before pulling away from the hard-fighting Cebu Institute of Technology-University (CIT-U) Wildcats, 81-67, to bump their unbeaten run to four games.

The Green Lancers, on the other hand, grabbed their third win in a row with a 68-49 victory over the struggling Southwestern University (SWU)-Phinma Cobras.

UV, which dropped its first two games of the season, now has a 3-2 (win-loss) card.

UV head coach Gary Cortes said the two losses at the start of the season was a great wake-up call for the team.

“It’s good that they’ve woken up after those two losses. They needed that,” said Cortes.

But the Green Lancers had too much firepower as a fastbreak lay-in by Michael Maestre and an and-one by Rey Suerte put the game out of reach, 63-48, with 2:07 remaining.

Maestre led the Green Lancers with 18 points, six rebounds and two blocks while Suerte flirted with a rare triple-double with 12 points, eight boards and eight assists.

In the first game, the Wildcats played ferocious basketball and actually held a 57-53 lead. A layup by Kevin Oleodo gave CIT-U its final taste of the driver’s seat at 64-61 with 6:23 to go.

It was all UC from there with Cameroonian big man Frederick Elombe leading a blistering 20-3 endgame kick to give the Webmasters its fourth win in as many games.

Elombe scored eight of his 18 points during that pivotal run while also adding an incredible 23 rebounds, three assists, two steals and a blocked shot.

The Wildcats remained winless in five games so far this season.