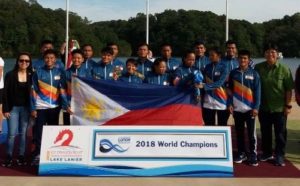 Members of the 10-seater senior mixed team during the awarding ceremony.
contributed

With drummer Patricia Bustamante and steerer Maribeth Caranto leading the way, the Filipinos clocked two minutes, 7.5 seconds to improve on their bronze-medal finish in the same event during the 2016 world championships in Moscow, Russia.

Arriving second were the Hungarians, who timed 2:11.36 in a narrow finish to nip the Americans (2:11.86) for the silver medal in the biennial meet featuring the best 16 countries in the world of dragonboat racing.

“They really wanted to prove something out there and they never lost focus despite the strong opposition,’’ said PCKDF president Jonne Go.

The Filipinos struck a second gold medal just a few hours apart after dominating the 20-seater senior mixed 500m race again at the expense of Hungary and the Czech Republic.

They clocked 1:52.58, beating their previous race-winning time by three seconds two years ago in Moscow.

“We never doubted the team’s ability to win. Once again, they showed the world that we Filipinos are world-class in this sport,’’ said Go For Gold’s Jeremy Go, who helped bankroll the participation of the PCKDF with the Philippine Sports Commission.

It was a rejuvenating feeling for the Pinoy paddlers after they went home without a medal in the recent Asian Games in Indonesia where the organizers veered away from international standards by using shorter but heavier boats.

Head coach Len Escollante said the Philippines is on track to capture a third gold medal on Saturday when the national paddlers, led by Hermie Macaranas and Ojay Fuentes, compete in the 10-seater men’s 200 finals.