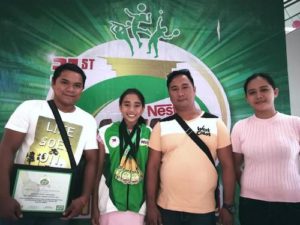 ANY MAN could father a child. But it takes a real man to be called a dad.

Lord Jashem Maraño proved this when he helped raise Alexi Kouzenya Cabayaran of Silay City, Negros Occidental to be a multi-titled swimmer at a young age.

This he accomplished despite being the step dad of the 11-year-old Cabayaran.

But Maraño has showed he is more than capable of playing the role of a dad.

In fact, Cabayaran’s accomplishments in the recent 23rd Milo Little Olympics Regional Visayas Finals can be partly credited to him, who has been supportive of the skills of the youngster from the start.

Cabayaran, a first timer, had stunned the 23rd Milo Little Olympics Regional Visayas Finals after she bagged a total of nine gold medals, four of which in record breaking fashion, which earned her the honor of being named as the Most Outstanding Athlete in swimming.

Cabayaran was abandoned by her biological father when she was still an infant.

But fortune had smiled upon her when her mother, April Empio, met Maraño, who has since then stepped up to the plate of being the child’s dad.

It was Maraño who saw the potential of Cabayaran as a swimmer. He was also the one responsible of developing her skills since she showed interest in the sport when she was still five years old.

“She really loves being in the water, so I figured a way to develop her skills and thank God it paid off very well,” said Maraño.

According to Maraño, Alexi has a “God-given talent” in swimming.

“Me and her mother are both scared to swim. And nobody in our family has a swimming background. So it is very surprising to see how talented she is when it comes to swimming. I think God blessed her with this talent and I am very thankful for it.”

While Alexi clearly has the talent in swimming, it seems that she couldn’t have achieved her goals without the help and guidance of her step dad. The perseverance of Alexi in training and Maraño in guiding his stepdaughter may be the reason for the youngster’s success.

Maraño accompanies Alexi when she travels 60 kilometers from the Mambulac Elementary School in Silay City onboard a tricycle to the Olympic-sized pool in Bacolod City to train every day.

“I have to be always at her side so that she can feel my love like her real father. Part of my income in my business I spent to support her training in swimming because she’s the only swimmer in her school,” said Maraño, who who runs an egg wholesale business in Silay City.

The promising Alexi also should be credited for her achievements so far.

“She is really a hardworking student and athlete that is why we are very proud of her,” said Empio of her daughter, adding that her daughter usually wraps up her training about 9 p.m. and still attends to her studies as soon as she gets home.

All those sacrifices, though, has paid off.

Alcoseba’s records in the 100m butterfly and the 200m freestyle.

“I would have never done this if not for my parents. They are very supportive in my swimming,” said the sixth-grader.

Her other golds came from the 100m backstroke, 200m individual medley, 50m freestyle, and the 500m butterfly events.

According to Maraño, his stepdaughter is just starting and with perseverance and loving support from the family, he is confident that she will become a force to be reckoned with in the future.

Currently, they have hired a private swimming coach, Edmond Chua, for Cabayaran to further develop her swimming skills.