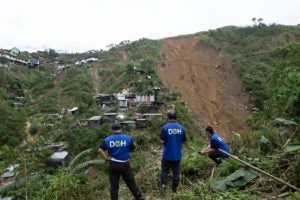 The number of people killed in the wake of typhoon “Ompong” (international name: Mangkhut) climbed to 74 on Tuesday while 55 others remain missing, according to data released by the Philippine National Police (PNP) Public Information Office.

PNP’s numbers show that most of the casualties come from the Cordillera Administrative Region (CAR), with 60 dead. This was followed by Region 2 (10), Region 3 (2), and Region 1 and National Capital Region (1 each).

Landslides in Benguet due to rains and winds from Ompong, specifically in Baguio and Itogon, were the cause of most of the deaths in CAR.

(Instead of giving them groceries from time to time, why don’t we make this financial aid regular, organized and with a fixed time-frame? If they get cash, they can decide how to spend it best for their needs.)

Poe said five percent of the cash transfer fund must be allotted to victims of natural disasters and other calamities.