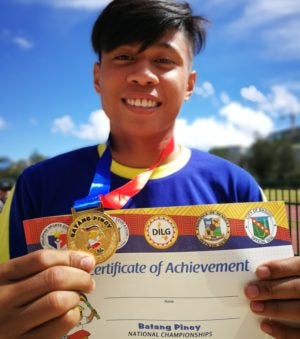 The 15-year-old Amamampang, a ninth grader of ANS and from Barangay Banawa, Cebu City, had a best jump of 13.69 meters to win the gold.

His performance got him an invitation from the Philippine Athletics Track and Field Association (Patafa) to join the Asian Youth Games next year given that he improves his jump to 14 meters in order to qualify for the national team.

“I am so happy because I failed to get medals in the long jump and high jump and I already felt hopeless but thank God my prayers were answered,” said Amamampang.

Amamampang was one of Cebu City’s six gold medalists on Thursday. The others were Gian Mangitngit in karatedo, Julius Mark Joring and Bernadeth Ginobiagon in arnis, Giselle Anne Betuya in weightlifting, and Edelyn Vosotros in chess.

As per Team Cebu City officials, the team now has 24 gold medals, 19 silvers and 22 bronze medals.

Cebu Province now has 21 gold medals along with six silvers and 12 bronze medals.