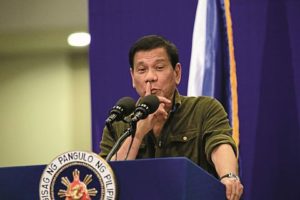 PRESIDENT Rodrigo Duterte has admitted that he underwent endoscopy and colonoscopy a week ago, but Malacañang said it was just a “routine” checkup and is not a cause for worry.

Endoscopy is a nonsurgical procedure to examine a person’s digestive tract. Colonoscopy, on the other hand, is a procedure that checks if there are abnormalities in the large intestine and rectum.

Duterte made the admission during a clinical forum in Lapu-Lapu City, Cebu on Friday.

The procedures were performed by his gastroenterologist, Dr. Joey Sollano. Duterte also said he has a “bad case of Barrett.”

“I had my colonoscopy and endoscopy about a week ago,” Duterte said in a speech during the Asia Pacific Association of Gastroenterology 3rd Inflammatory Bowel Disease Clinical Forum.

“Joey (Dr. Sollano), did the procedure and he said that… Well, I have a bad case of Barrett. He said, if you’ll just stop drinking, you will live,” Duterte said.

In August, the President revealed that he is in “perpetual pain” due to a spinal injury following a motorcycle accident.