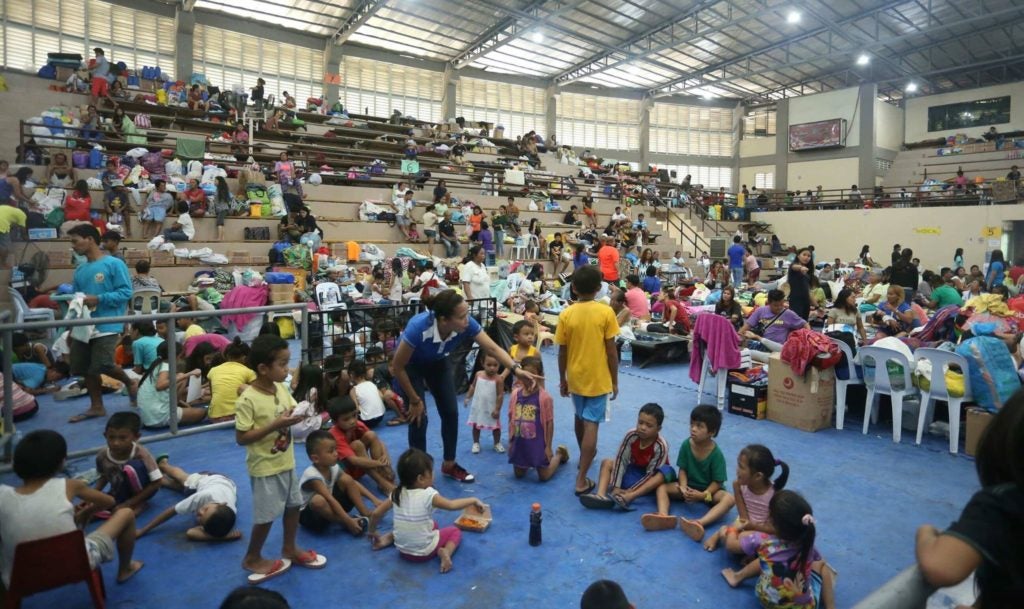 A social worker organizes a game for children at the children-friendly space in the Enan Chiong Activity Center, which has been turned into an evacuation center for the landslide victims.
CDN PHOTO/LITO TECSON

In a corner of the Enan Chiong Activity Center (ENAC) in the City of Naga, some of the 525 children-evacuees of the landslide that hit Sitio Sindulan, Barangay Tinaan in Naga City, gather, play games, and even have storytelling sessions.

This is the children-friendly space established by the Department of Social Welfare in Central Visayas (DSWD-7).

Melinda Cañares, point person of this evacuation center from DSWD-7, said that these activities would help in alleviating the trauma that some children might have experienced because of the incident.

Activities such as art sessions, storytelling, singing and playing games are among the things that volunteers and social workers conduct at ECAC for the children at a corner of the evacuation center in Barangay Poblacion.

Cañares said that the team had allocated one area with railings in the evacuation center as a space for sessions and games for the children so as not to hamper the distribution of relief packs for the evacuees.

1,411 evacuees
The ECAC houses 516 families or 1,411 individuals, who are mostly from Sitio Sindulan, the area where the landslide hit.

The ECAC is also one of the eight evacuation centers for the displaced residents of Sitio Sindulan and Sitio Tagaytay.

According to data from the City of Naga government, the ENAC has the highest number of evacuees among the eight evacuation centers.

On Sunday, the 525 children including the three children neighbors, whose ages are seven, eight and ten years old, were seen participating in the activities at the children-friendly space.

The three neighbors listened to stories, created artwork, played games and sang songs that helped them to forget their traumatic experience even for just a while.

Cañares said that the storybooks and coloring materials they used in the sessions were from the donations.

On cases for people, needing psychosocial intervention, Cañares said they were also taking care of that aspect in the evacuation center.

“Naa man tay mental health activities, aside sa volunteers nag conduct man pod ang DOH. Naa puy mga educators for children with special needs (We have mental health activities to address this and that is aside from the health department’s volunteers, who had been conducting interventions. We also have educators for children with special needs),” Canares said.