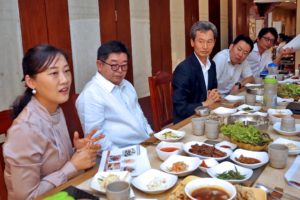 In the picture are Kim Yeohoon of the Korean Women’s Association; Cho Bong Hwan, president of the Cebu Korean Association Inc.; Oh Sung-yong, Korean Consul General, Consulate of the Republic of Korea in Cebu.
contributed photo

Cebuanos will get a chance to taste Korean food, wear the “Hanbok,” the traditional Korean costume, and get to see K-Pop stars perform in this year’s Korean Day celebration scheduled on September 29 at the SM City Cebu Mall Northwing Atrium.

The celebration, which is now on its eighth year in Cebu, is a manifestation of the “harmony between Korea and City of Cebu,” said Cho Bong Hwan, president of the Cebu Korean Association Inc.
“We are good friends,” Cho said in a press conference yesterday.

The association is bringing to Cebu a newly formed K-Pop group called “Astin,” that will make their debut in Korea with a song called Pandora on October 2018, to perform cover songs and dances for Cebuano K-Pop fans.

Also coming here is an all-female Nanta Group called TA:POS that will play the drums in a not so very conventional way.

From September 28 to 30, a Korean bazaar and cultural exhibit will open at the SM Mall Atrium D, while a food festival will be located at the mall’s V-Hire terminal.

Kim Yeohoon of the Korean Women’s Association said that they will be selling traditional Korean pouches, bags and cosmetics at the bazaar.

At the exhibit area, they will be putting up a display of their “Hanji” or the Korean paper craft, traditional costumes and accessories, and musical instruments to include the Janggo, Jing, Sori-buk and Kkwaenggari, among others.

Kim said that their food tasting area will put on display Korean delicacies that will include the Tteok (rice cake), Kimchi, Japchae (Korean noodles), rice wine and the Bulgogi (meat).

The food that they will put on display are made from ingredients that are sold in Korean stores in Cebu and vegetables like cabbage that are available at the Carbon Market in Cebu City.

Kim said that free food tasting will be made available to the public from 11 a.m. to 12 noon and 4 p.m. to 6 p.m. during the duration of the food festival.

But Korean food will already be for sale for the rest of the day, she added.

Experience what it feels like to be wearing the “Hanbok,” the Korean traditional costume at their experience area.

For a fee ranging from P80 to P100, you will get to wear the “Hanbok” of your choice and some hair accessories for 15 minutes.

Korean films – The Pirates, Nameless Gangster, Warriors of Dawn, Dong Ju and Assassination – will be shown at the SM Cinema 5 from September 29 to 30.

A total of 25 groups will also compete in the K-Pop Start grand finals scheduled on September 28 at the SM Mall Northwing Atrium.