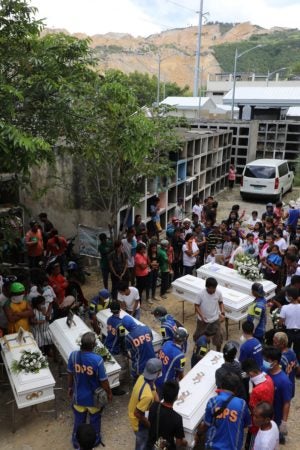 Twenty of the victims of last Thursday’s massive landslide in Naga City were laid to rest on Monday, September 24, at the New Naga City Cemetery in Brgy. Naalad amid calls by the survivors to stop all quarrying operations in their area. In the background can be seen some of the areas affected by the landslide which has so far claimed 55 lives. | CDN PHOTO/TONEE DESPOJO

Families of deadly Naga landslide seek justice as they bury their loved ones; death toll now stands at 55

Cries for justice rang out on Monday as 20 of the 55 fatalities in the massive landslide in Naga City, south Cebu were laid to rest.

The bodies — some of which were already decomposing — were buried inside masonry niches at the public cemetery in Barangay Naalad, Naga, past 1 p.m.

Families of the victims echoed calls for Apo Land and Quarry Corp.(ALQC) to stop its quarry operations in Barangay Tinaan and the other parts of Naga City which they blamed for the landslide.

While the Requiem Mass was going on, a banner with the words “Justice! STOP Quarrying!” was put up outside the St. Francis of Assisi Parish by Alexander Dejilles who lost at least 15 relatives during Thursday’s tragedy.

“Siguro panahon na nga ilang tan-awon nga dili lang ta puro panindot sa syudad. Tan-awon sad nato ang risgo sa mga lumolupyo (May be it is time for the local officials to look at not just beautifying the city. They should also look at the risks to the residents),” said Dejilles whose cousin Lina Campanilla and her entire family were killed when the tragedy struck in Sitio Tagaytay on Thursday morning.

Like other affected residents in Naga City, Dejilles believed that the quarry operations triggered the landslide that killed members of his family.

“There was no actual quarrying in the place. What was done was an access road development,” he explained.

Mañago said the company would conduct its own probe to find out what caused the landslide.

As of 8 p.m. on Monday, 55 dead bodies had been dug out from the landslide area while 45 persons remained missing and 10 wounded.

Only 20 were buried on Monday while nine more bodies lie in state at the Naga City covered court. The rest were still being processed by a lone funeral parlor that was commissioned by the city.

Despite wounds on his body and legs,Christopher Semilla went to the covered court about two hours before the Requiem Mass to pay his last respects to his neighbors who died during the landslide.

Semilla said the sight of the crumbling soil and boulders that crushed every home in Tinaan still haunted him at night.

The coffins were then brought to St. Francis of Assisi Parish for a Requiem Mass.

But the mourners stood away from the coffins inside the church due to the foul odor from the decomposing bodies.

The priest had to wear a surgical mask while he blessed the coffins.

Naga City Mayor Kristine Vanessa Chiong has promised to shoulder the burial expenses of the fatalities.

She said the city would also pay for the medical expenses of those who were wounded.

She also declined the “technical” advise to downgrade to search and retrieval operations as the operations entered the sixth day today.

Chiong stressed that there might still be some survivors buried in the debris.

So the operation remained relentless in the hope of finding someone alive underneath the rubble of soil and rocks.

“Hope should be there,” said Engr. Ver Neil Balaba, chief of the Disaster Risk Reduction and Management Division of the Office of the Civil Defense in Central Visayas (OCD-7),

“Remember the other incidents from other countries. Some survive for weeks or even months (being trapped underneath),” he said.

The government’s life detection machines, however, had not monitored any signs of life in the area.

In the meantime, Chiong maintained that the Mines and Geosciences Bureau in Central Visayas (MGB-7) did not inform the the city regarding the risks in Sitio Sindulan, Tinaan, after cracks were found on the mountain slope above the homes.

In an incident briefer, the MGB-7 claimed that a geo-hazard threat advisory was sent to the mayor’s office on Sept. 12 that warned the top official of possible heavy rains that may trigger flash floods in low-lying areas and landslides in the slopes.

“Results of the geo-hazard mapping and assessment within your area of jurisdiction provided you with important information findings and recommendations that would enhance your efforts at reducing the possible effects of impacts of Typhoon Ompong,” the briefer read.

Secretary Cimatu on Friday relieved the top four officials of the MGB-7 after they said the cracks on the mountains of Sitio Tagaytay, in Barangay Tinaan were a natural phenomenon and not caused by the quarry operations of Apo Land.

TAGS: again, NEVER, September 24, Twenty of the victims of last Thursday’s massive landslide in Naga City were laid to rest on Monday