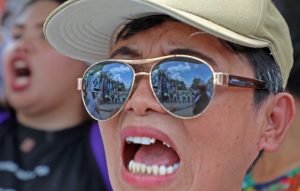 CRY FOR JUSTICE. Cherry Candol (right) joins environmentalists and relatives of those killed in the Naga City landslide, in a protest rally demanding that Apo Cement stop its quarrying operations in the mountains of Naga. Candol’s cousin was among those still missing five days after the tragedy. CDN PHOTO/ TONEE DESPOJO

This was the demand of the families of those who perished in the massive landslide that buried two sitios in Naga City on Thursday.

At least 30 members of an environmental advocate group, Pusyon Kinaiyahan, and relatives of the landslide victims staged protest rallies in front of the Apo Cement Corporation (Cemex) plant in Barangay Tinaan and at the City Hall on Tuesday, demanding that quarry operations in the mountains of Naga City be completely stopped.

Waving black flaglets, the rallyists cried their lungs out in front of the Apo Cemex plant in a show of frustration over the number of fatalities that the landslide has claimed and desperation over the agonizingly slow rescue and retrieval operations.

“Kung wala pa ninyo gi-quarry ang bukid, dili mag-landslide ug dili mamatay ang daghan nga tawo,” (If you did not quarry the mountains, there would be no landslide and those people would not have died), said Bro. Peter Simon Jardinica of Pusyon Kinaiyahan.

As of 6 p.m. on Tuesday, the Emergency Operation Center (EOC) has already retrieved 60 bodies from the main landslide area in Sitio Sindulan, referred to as ground zero.

The search, rescue and recovery operations teams have not found any survivor on Tuesday, while 28 people remain unaccounted for.

Apo Land and Quarry Corporation (ALQC), the raw material supplier of Apo Cemex, has mining rights over an area in Sitio Tagaytay.

But Chito Maniago, the representative of the ALQC, said in previous reports that the company has not started any quarry operation in the area yet and that their actions in Sitio Tagaytay was limited to road access development.

Cherry Candol, one of the rallyists, said her cousin Genaro Segovia, who works as a watchman for Apo Land and Quarry Corp. (ALQC), was among those buried in soil and debris in Sitio Tagaytay.

Candol said Segovia was at the tenement of ALQC to look after the backhoe and other heavy equipment in the area the night before the landslide happened.

“Mga wala moy kasingkasing! Akong ig-agaw namatay didto sa Tagaytay wala ninyo ugkata,” (You are all heartless. My cousin died in Tagaytay but you did not retrieve his body), shouted Candol while crying inconsolably during the protest.

The protesters also blamed the government, including the local government of Naga City and national government agencies for allowing quarrying in the area despite the risk on people’s lives.

They also demanded that those responsible for the death of their loved ones must be punished.

Candol, who resides in the nearby village of Pangdan, said they also worry for their safety because the mountain behind their home was also quarried and has manifested cracks.

In a separate interview, Naga City mayor Kristine Vanessa Chiong said that they will heed to “what is best for the city.”

Chiong said that while there is a law that allows mining operations, including quarrying, in some areas, the LGU will only implement what the Department of
Environment and Natural Resources recommends.

Chiong also said that she, as the local chief executive, has immediately reported and sought technical assistance from the Mines and Geosciences Bureau (MGB) after residents reported the cracks in Sitio Tagaytay.

However, Chiong said that this is not time to point fingers but to unite in aiding the displaced families,

especially those who have lost loved ones.

Chiong said that a P20,000 cash assistance from the national government is now being processed for the families of the casualties as well as those who were injured.

The ALQC director in Asia, Chiong said, has also committed to give P30,000 for each of the fatalities.

Commenting on the protest held by environmental advocates and relatives of landslide victims, ALQC representative Chito Maniago said they will just cooperate in the ongoing investigation.

“If the group raised any issue, there is an ongoing government investigation composed of geologists, mining, environment, and safety engineers,” he said in a statement sent to Cebu Daily News.

“We reiterate that we are fully cooperating with this investigation to help ensure safety and normalize the situation in affected areas,” he added.

Meanwhile, the caretaker of the Mines and Geosciences Bureau in Central Visayas (MGB-7), said that the Naga landslide could bring about major changes in the policies regarding the granting of Mineral Production Sharing Agreement (MPSA) to mining and quarry applicants.

“I think, yes. They will be affected especially on major decisions,” said Engr. Armando Malicse, Mine and Safety Environment and Social Development chief of MGB-7.

Under Sec. 26 or the Modes of Mineral Agreement of the Mining Act of the Philippines (RA 7942), “For purposes of mining operations, a mineral agreement may take the following forms as herein defined:

“a. Mineral production sharing agreement is an agreement where the Government grants to the contractor the exclusive right to conduct mining operations within a contract area and shares in the gross output. The contractor shall provide the financing, technology, management and personnel necessary for the implementation of this agreement.”

According to Malicse, what happened to barangay Tinaan on Thursday, should be a lesson for everyone.

He said that in Central Visayas, nine mining and quarry operations are under the jurisdiction of MGB-7.

Malicse said that seven teams of experts composed of two to three members were already deployed by MGB-7, to review the operation of these companies,  excluding ALQC.

ALQC was currently assessed and investigated by technical teams augmented from their central office and Mimaropa region, composed of 11 geologists, mining engineers and computer experts.

The team also monitors the terrain and materials on the ground, as well as the safety practices that ALQC has implemented before the landslide.

The technical team has arrived last Saturday. Malicse said that they will submit a report on their assessment of all quarry and mining operations in the region to their central office after 15 days, while they still can’t determine the timeline on the investigation conducted by their experts at barangay Tinaan.

As help and donations continue to pour in for the victims of the killer landslide, the Talisay City Council approved on Tuesday a P1 million assistance for the survivors.

Councilor Chui Aznar, chair of the committee on appropriations, said the amount will be sourced from the city’s Quick Response Fund. The said resolution was passed through mass motion.

Aznar added that they will probaly hand over the donation today, September 26.