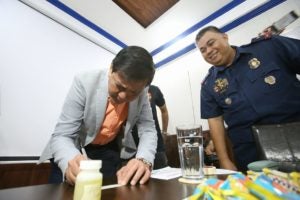 During his visit, Rama sought to clear his name after he was named in the drug watchlist of President Rodrigo Duterte. The former mayor was also subjected to a drug test inside Sinas’ office.

In an interview, Rama reiterated that he is not a drug protector and user.