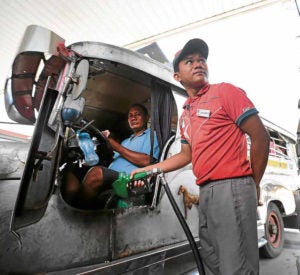 MORE GROANS AT THE PUMP. A gas station attendant fills up the diesel tank of a jeepney. On Tuesday, diesel prices went up by at most P1.35 per liter, further diminishing the earnings of jeepney drivers./inquirer photo

Jeepney drivers, eateries and households — these are just some of the most affected sectors with the continued increase in oil prices.

And it’s the ordinary folks that are bearing the brunt.

For 41-year old Nicanor Buluasa, going out earlier to ply his route from Barangays Busay and Lahug, all the way to Carbon, is his way of getting more income as a jeepney driver in order to afford the increasing fuel prices.

(Before, I would start plying my route at 6 a.m. Now, I have to start as early as 4 a.m. so I can have more income to buy more gasoline which is now so expensive)

Fortunately, in Buluasa’s route, there are already a lot of passengers as early as 4 a.m. since they have to go to the Carbon public market to buy.
It’s not the same for others.

Alfredo Maningas, 55, drives a 04C jeepney which plies from Campo in Barangay Lahug to the downtown area.

On his usual days, there are not a lot of passengers in his route especially in the early afternoon. Sometimes, he would just get less than 15 passengers in a single trip between 2 p.m. to 4 p.m.

(So now, I have decided not to ply my route after lunch. I just go out in the morning until noon and then resume by late afternoon. This way, I won’t have to consume so much gas, for only a few passengers)

For the past eight weeks, the total amount of increase in the prices of oil products is already approximately P4 per liter.

“For now, what’s most important is to conserve. Motorists should carefully plan their trips using their cars,” he said in Cebuano.

The DOE has earlier explained that the continued oil price hikes is caused by the increasing prices of oil in the world market.

The factors include lesser production among oil-producing countries as well as geo-political problems among countries like Iran and the United States.

Merlita Gabin, 43, owns a small eatery along Gorordo Ave. She, too, has felt the pinch in the more expensive LPG tanks.

(We consume two to three LPG tanks a month. We really spend a lot on this since we cook a lot of food — breakfast, lunch, and dinner)

In order to cope, they have decided to increase the prices of some of their viands and lessen their portions a bit for them to be able to retain their prices of between P35 to P45 per viand.

For example, their fried food like eggs, hotdogs, longganisa, and fish have increased by P1 or P2 per piece.

Read Next
Who are you wearing?