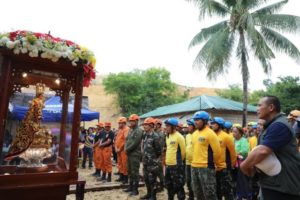 IT WAS a Saturday morning filled with sobs and tears as relatives and local officials bid goodbye to and buried the last group of victims of the landslide in Sitio Sindulan, Barangay Tinaan, Naga City.

Yesterday marked the 17th day since the soil from Sitio Tagaytay eroded and buried over 30 houses, and claimed the lives of 78 individuals in Sitio Sindulan. 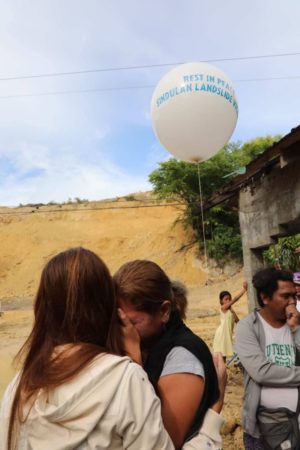 A Holy Mass and procession were held at ground zero for the victims of the landslide, which was attended by local officials of Naga City, relatives and friends of those who perished, law enforcers and rescuers, and residents of Sitio Sindulan.

The burial Mass of 32 fatalities also marked the end of the search and retrieval operations, even as five persons were still missing and believed to be buried under tons of rubble now beyond the reach of the responders. 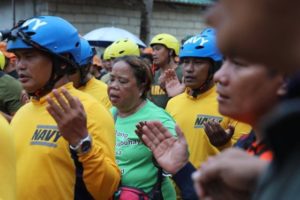 A tearful Naga City Mayor Kristine Vanessa Chiong announced that the search and retrieval operation officially ceased yesterday, in compliance to the advisory from the central office of the Mines and Geoscience Bureau (MGB) for them stop digging the area because the unstability of the soil at the site has become too dangerous for the responders.

This meant that the remaining responders from different local government units (LGUs) in Cebu and the Bureau of Fire Protection (BFP) could finally go home after more than two weeks of assisting the Naga City Government. 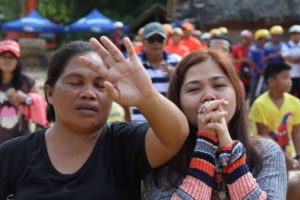 “According to MGB, ground zero poses threats to the rescuers and responders especially that it has been raining in the past few days,” said Chiong.

The mayor also turned emotional when she said that while they could no longer continue with the retrieval operation, she was hopeful that they would still find the five others who remained missing as of yesterday noon. 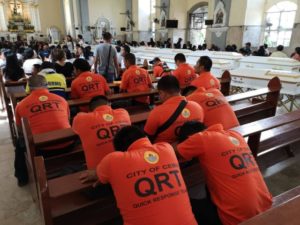 October 6, 2018: Cebu City’s Quick Response Team take a nap while waiting for the requime mass of the 32 victims of Naga landslide. The group start it’s duty in Naga since 4am today.(CDN PHOTO/TONEE DESPOJO)

“My prayer and my thoughts also goes to those who remained missing. We cannot continue the retrieval operations but hopefully they will be found,” she added.

Chiong also hoped and prayed for Nagahanons to have the strength and inspiration to continue forward. 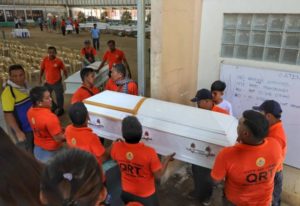 Preparing for the burial of 31 victims of the Naga landslide.(CDN PHOTO/TONEE DESPOJO)

The remaining 32 bodies and body parts were buried at the Naga City Public Cemetery in Barangay Naalad yesterday afternoon.

They were the last batch of cadavers whose common wake was held at Naga City’s Tennis Court.

Meanwhile, the Naga City Government agreed to the recommendations of the Provincial Disaster Risk Reduction and Management Office (PDRRMO) to let law enforcers from the Philippine National Police (PNP) stay and secure ground zero from habitation, especially from former residents who might want to return to the area.

PDRRMO chief Baltazar Tribunalo said residents of Sitio Sindulan and nearby villages are still not allowed to return since they are still waiting for the geohazard assessment of the Department of Environment and Natural Resources (DENR).

“The area is still unsafe and we’re still waiting for the geohazard assessment of DENR which will determine which will be declared as critical and unsafe zones,” said Tribunalo.

“In the meantime, the police will still be around to secure the area from trespassers, and considering there are still some properties and belongings left,” he added.