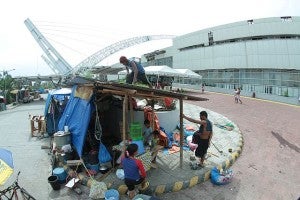 Narciso Hernani fix the roof of their makeshift house inside the CICC compound yesterday after they were drenched by an early morning heavy rain which signals the coming of the rainy season. (CDN PHOTO/FERDINAND EDRALIN)

Cause-oriented groups appealed to the Mandaue City government to relocate settlers occupying the compound of the Cebu International Convention Center before their homes will be demolished.

Based on the city’s list, at least 258 families will be relocated while 177 families were offered to avail of the Balik Probinsiya program.

The setters, who were victims of a fire Barangay Mantuyong years ago, were ordered to vacate the area to pave the way for the construction of a hotel and an entertainment center.