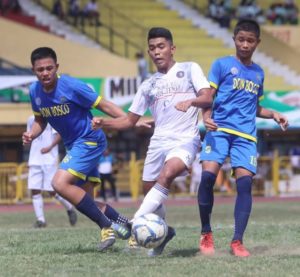 The win allowed the Magis Eagles to end their elimination campaign not only as the top ranked team but also with a clean record after not having dropped any of their five matches which gave them a perfect score of 15 points.

Ateneo, though, may still be missing one of its key players in Julian Matheu Cabatingan who will be meted with an additional one game suspension for what organizers deemed an “indecent act” for removing his jersey and attempting to pull down his shorts while inside the pitch in their game last Oct. 6 against University of Southern Philippines Foundation (USPF).

Colina, however, said they will wait for an official communication regarding the matter before making any moves but that whatever the decision is, they will appeal it.

The Greywolves, on the other hand, set themselves up for a must-win situation for their last elimination match after dropping to fifth place in the rankings following USPF’s 3-0 rout of the Sisters of Mary School (SMS) Boystown Aloysians.

DBTC currently holds a 1-2-1 win-loss-draw record equivalent to four points and will contest the final semifinals slot with USPF who is currently in the fourth place with its five points owing to a 1-2-2 card.

DBTC’s last game will be against the SMS Boystown Aloysians on Tuesday, 3 p.m., still at the Sports Center.

Should DBTC win against SMS, then the Greywolves will take the final semis slot as it will give them a total of seven points. USPF has no more matches left.

In the other game, University of San Jose-Recoletos (USJ-R) Baby Jaguars ended the eliminations as the second ranked team after a 2-0 blanking of the University of San Carlos (USC) Baby Warriors who end their campaign at third place with a 2-3-0 card equivalent to six points.