Milo runner injured after getting hit by “drunk” driver 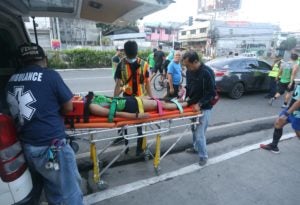 Hazel Conde, the runner who got hit by a Toyota sedan, is already in stable condition, according to Ricky Ballesteros, the organizer of the Cebu leg of the 42nd National Milo Marathon.

Conde is currently confined and is under close medical monitoring at the Saint Vincent Hospital.

She is safe and sound, said Ballesteros.

Conde suffered cuts and bruises and is scheduled to undergo several medical examinations for further evaluation.

Ballesteros added that the driver of the car that hit Conde was under the influence of alcohol. He had tested positive after the CITOM and the PNP personnel administered a liquor test on him.

Read Next
Passing through the needle’s eye