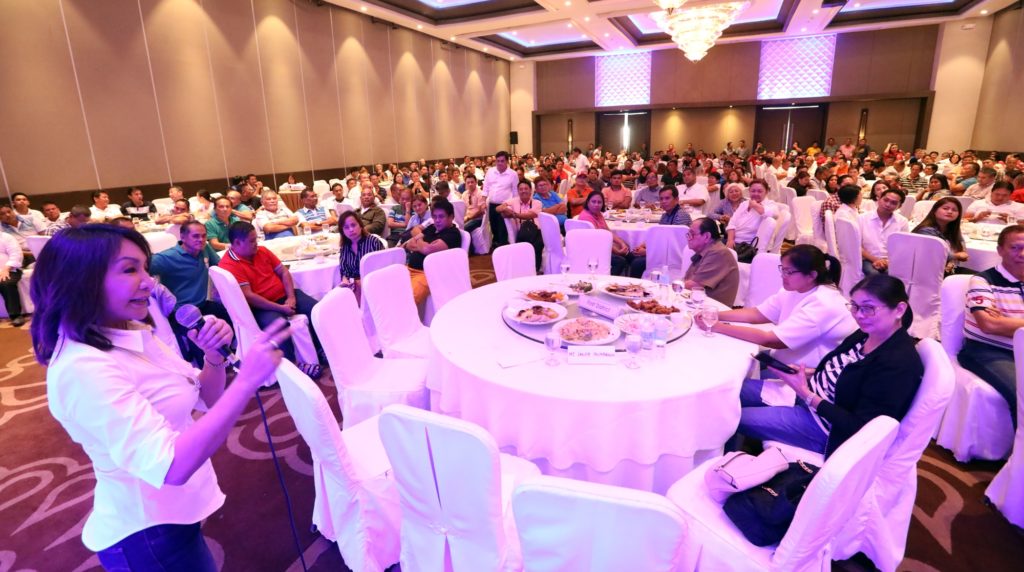 REP. Gwendolyn Garcia (Cebu 3rd district) is strengthening her bid to run for governor for the 2019 midterm election as she seeks pledges of support from her allies under the 1Cebu party during the party’s general assembly at a convention center in
Cebu City on Sunday (Oct. 14).

“Gikinahanglan nako ang tagsa-tagsa ninyo nga tabang pagsuporta kay sama sa giingon ni Congressman Benhur (Salimbangon) nga dili kini bahid personal nga interest o personal nga ambisyon, (I need all of your support as what Congressman Benhur Salimbangon (Cebu 4th district and 1Cebu party member) said that this is without personal interest or ambition) this is for Cebu and this is for the Cebuanos,” Garcia said during the gathering.

Aside from her 1Cebu allies Representative Garcia also got pledges of support of local officials from other parties such as Rep. Gerald Anthony “SamSam” Gullas (Cebu 1st district).

“We talked with Cong. Gwen that we will support her eventhough that NP (Nacionalista Party) mi,” he said.

Gullas also said that she got the assurance from Garcia that she would not issue a CONA (Certification of Nomination and Acceptance) to PDP-Laban candidates who would be running against NP candidates in the first district of Cebu province.

Gullas was earlier offered to be Garcia’s running mate, however, he refused because he was running for Talisay City mayor, replacing his grandfather (incumbent Mayor Eduardo Gullas), who would be seeking a congressional seat.

“We are very, very happy with the pledge of support from Cong. Samsam Gullas and all of his mayors from the first district,” said Garcia.

Aside from that, Garcia also issued a CONA to PDP-Laban candidates in Cebu, including her son-in-law and Cebu Ports Authority Commissioner Duke Frasco, who would run as 5th district representative.

Although Garcia has already filed her Certificate of Candidacy (COC) to the Commission on Elections (Comelec) in the province, she failed to announce who would be her vice gubernatorial candidate.

“Certainly, my vice governor will be a registered voter of the province of Cebu,” said Garcia when interviewed about her running mate.
Garcia said that proper announcements would be made “in due time.”

Political aspirants have until Wednesday to file their COCs with Comelec.

Garcia had also made an earlier offer to Representative Salimbangon to be her running mate, but the congressman declined.