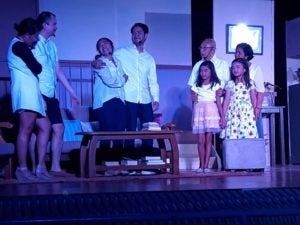 AT A running time of one hour and 30 to 40 plus minutes, the stage play “Tulo Ka Adlaw Una Mag Singkwenta Ka Tuig (the literal translation being ‘Three Days Before 50 Years’)” by the Cebu-based theater group OurHouse Productions is about as long and perhaps just as comparable to any Filipino (read: Tagalog) movie being shown in the cinemas in terms of story quality and length.

By the way, this piece is somewhat of a review with plot points and elements stitched in since the play ended its two-day run at the University of Southern Philippines Foundation (USPF) auditorium last Saturday, Oct. 13. I hope you read on and see if the above comparison is justified or not.

With four matinee showings held at 1 p.m., 3 pm, 5 p.m. and 7 p.m., the stage play written by Josh Eballe and directed by Troy Tumarong tells the story of the Escaño family whose four adult children were stunned by their parents’ revelation that they were separating after 50 years of
marriage.

All of the children, notably JR Escano (Eballe), the eldest along with younger sister Judy (Ansel Eve Ancajas) were understandably rattled by the news coming as it is three days ahead of their parents’ 50th wedding anniversary (hence the title) and this development causes long simmering sibling resentment to surface and boil over.

The resentment stems initially from the absence of one of the siblings Joy (Rachel Laya-og) whom JR and Judy complained had been spoiled by their parents and yet was never around when needed.

Then there is Jesse (Everild Catugal), the youngest, whom the elder Javier Escaño (Nicolas Ampatin) and Josephine Escaño (Doris Nelsa Banaynal) consider as the most mature and who somehow manages to bring all siblings together despite their animosity towards each other and differences.

A heated argument between JR and Joy that caused their mother to suffer a hypertensive episode opened the doors for the audience to look into the personal lives of each character, each of whom carried a burden or two that is common among Pinoy families whether in reel or real life; an early marriage heading to the rocks for Joy, a childless relationship for Judy—caused by her fear of disapproval from JR, who sacrificed time, money and effort to support the family—and the elderly Escaño couple, both of whom wanted to pursue lifelong dreams that they believe would only be hindered by their continued union.

Speaking of Joy, there is a side trip of sorts as Joy catches up with her former flame Dr. Lester Villanueva (Niño Atwell Ardiza), who happen to be her mother’s doctor that became a source of friction and confrontation between her and her husband Ian Borja (Nash Durano) that is a bit too saccharine and melodramatic but it did draw some ‘kilig’ reactions from the audience so no harm done.

Owing to its running time, the resolution to the plot’s central conflict feels a bit rushed and Jesse’s death due to hypertrophic cardiomyopathy—that he had this heart condition all that time and no one in his family noticed any symptoms in all those years is hard to believe—after another  confrontation within the family did tie up all loose ends.

Still, the play’s greatest strength–as with all previous Our House productions such as “Si Chris, Si Claire Ug Merci” staged in August last year and won honors in the Sinulog Short Film Festival early this year including Best Supporting Actor for Nicolas Ampatin—is its heart and its theme of family love succeeding and enduring amid personal and hidden resentment and conflict from within.

Filipino audiences regardless of age, upbringing and exposure find it easy to relate to stories involving families and that’s what makes “Tulo Ka Adlaw Una Mag Singkwenta Ka Tuig” an easy, localized and thoughtful look into one family’s inner struggles and how they find ways to stay together amid these challenges.