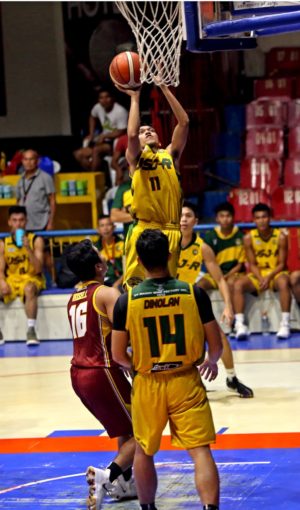 Jaybie Mantilla of USJ-R puts up a shot in an elimination round game against CIT-U in the Cesafi men’s basketball tournament at the Cebu Coliseum. CDN PHOTO/LITO TECSON

University of San Jose-Recoletos (USJ-R) star Jaybie Mantilla is well aware that the Final Four brings with it pressure unlike any other.

After all, it was only last year that he succumbed to it and the Jaguars paid dearly for it, costing them the chance to make it to the finals for the first time since 2008.

Armed with a twice-to-beat advantage in the 2017 Final Four, USJ-R got beaten by the University of Cebu (UC) two straight times, the last one a crushing 75-80 loss in overtime, wherein the jitterbug guard, who was named MVP just a few days earlier, scored a measly five points.

Mantilla is adamant in not letting that happen ever again, especially when his Jaguars face the University of San Carlos (USC) this Saturday in the Cesafi men’s basketball semifinals at the Cebu Coliseum.

“That really was my worst performance,” he said. “I remember committing a lot of turnovers. The semifinals really is different from the elimination round because the pressure gets ramped up.”

With that in mind, Mantilla, who is averaging 18 points, seven rebounds, six assists and two steals per game this season, said he will do everything to erase the stigma of that loss. And making it to the Finals with a win on Saturday will surely help.

“I’ll make a concerted effort that that won’t happen again,” said the 22-year-old Mantilla, the Sangguniang Kabataan chairman of Barangay Suba, Cebu City. “I have to start with the mindset of playing great defense, grabbing rebounds with the points coming last. I must keep my focus on at all times.”

The Jaguars are again armed with a twice-to-beat edge against the Warriors. But they know so well that it doesn’t assure them of anything.

Unlike last season, though, the Jaguars will be heading to this matchup with a huge difference maker in the face of Nigerian big man, the hulking Segamars Ewenike, who is averaging 10 points, nine boards and two blocked shots per outing.

Still, Mantilla reckons the Warriors to be a team that gave them trouble in their earlier matchups.

“We always had bad starts against them, so we really need to make adjustments. We have taken a look at the tape and reviewed our lapses. The important thing is we keep our communication open and keep our aggressiveness on defense. The offense will flow from that,” Mantilla stated.

“We really just have to keep our faith in one another and of course, in what Coach Leode (Garcia) will instruct us to do,” he added.

The other semis pairing features top team and many-time champion University of the Visayas taking on UC. The Green Lancers have the twice-to-beat edge in this series for finishing second after the elimination round.