How running is helping Milo 10k champ achieve her goals 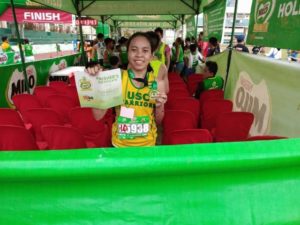 RUNNING, for some, has become a way for them to change their lives for the better.

For others, it is a refuge and an outlet.

“What’s important right now is that I finish my education and support myself because I have no one to rely on. Through running, I am not only able to support myself, I am also able to slowly achieve my goal as an athlete and a student,” said Saballa, who admitted making her frustrations in life her motivation for training.

Saballa is a member of the athletics varsity of the University of San Carlos (USC), where she is an irregular third year student taking up Bachelor of Physical Education.

However, being a product of a broken family with both parents now having families of their own, she has no one to rely on except herself.

She is basically on her own when it comes to finances.

In fact, she had to borrow money to be able to register in the 10-kilometer distance race of the 42nd National Milo Marathon Cebu leg last October 14.

Thankfully, she’d be able to pay her debt as she went on to win the women’s title in just her second try with a time of 42 minutes and 20 seconds.

Her experience in the Milo race basically sums up how life is for her.

Trials at first, then hope.

“There are times that I want to surrender because problems with family, finance and school come at the same time. Sometimes I say I’m so tired I want to surrender but I don’t know why I just keep saying that but don’t really do it. The Lord always gives me a reason to go on. Sometimes I noticed that He makes some people His instruments, people who give me advice. That’s probably why I’m still here,” she shared.

Saballa said she did not expect to win the 10k title because she was up against most of the top runners in Cebu.

She was only hoping to at least land in the top 3. She finished second in the same race category last year.

Saballa was delighted that with the cash prize, though, as she was not only able to pay off the money she borrowed for registration but also have a little extra for herself and her mother.

Saballa hails from Minglanilla, a town about 18 kilometers south of Cebu City.

But, she is currently staying in a boarding house in Cebu City paid by USC for being a varsity.

Saballa’s jolly demeanor hides the hardships that she endures, among them is having a father who does not support their family and the memory of a long gone older brother who drowned in 2011 while swimming with friends.

She said she always asks her brother for guidance every time she runs.

“I’ve already accepted that situation,” said Saballa, who used to get into trouble for fighting with her father’s other family.

“Although the thought that he can support others than me really hurts me. But I leave that all to God now.”

Now, what matters for her is to achieve her goals in life, and running is one way she can get there fast.

Read Next
Jesuit Athletic Meet in Cebu on Oct. 25-30