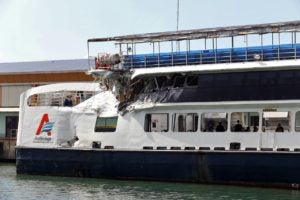 At least three persons were injured in a sea collision between a cargo and a passenger ship at Lauis Ledge off Talisay City on Thursday evening (October 18).
The Philippine Coast Guard- Cebu (PCG) received the alarm at around 8:45 p.m. that the two sea vessels collided.
The vessels involved were MV Fastcat M11, a fastcraft, and MV Ocean United of Oceanic Shipping Lines.
Lt. Jg. Mike Encina, PCG-Cebu spokesperson, said that three persons of the passenger vessel sustained wounds.
“One of the three passengers was rushed to hospital,” said Encina.
Encina said that the middle part of the fastcraft was damaged. It however managed to return safely to Pier 3 in Cebu City.
Encina said that the passenger vessel was bound for Tubigon, Bohol, carrying 70 passengers.
“We check the area where the incident happened and fortunately there was no oil spill observed in the area,” said Encina.
Both ships are now detained as the PCG-Cebu will conduct further investigation on the incident.