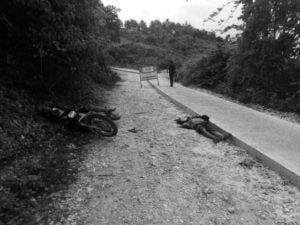 Two men believed to be guns-for-hire were killed in a shootout with Dalaguete police at past 3 p.m. today (October 19).

The fatalities were identified as Rafael “Raffy” Belia, 45, and a certain Berting who are both residents of Barangay Nalhub of the same town.

Chief Insp. Roland Aliser, chief of the Dalaguete Police Station, said that the two were implicated in the death of a barangay councilor from Alegria town.

Aliser said they also received a tip from a police informant that the two were also planning to kill a target in Barangay Poblacion on the same day.

With the information, Aliser said he ordered a police checkpoint in Barangay Balod, where the two suspects passed on their way to Barangay Poblacio.

The two guns-for-hire, he said, engaged in shootout with policemen who set up a checkpoint in Sitio Cambanog, Barangay Balod at around 3:45 p.m. on Friday.

Police recovered a .45 caliber pistol from Belia’s possession and a magnum .357 revolver from Berting.

Aliser said that the suspects, who were on board a motorcycle, were the first to fire at the police team manning the checkpoint.

He said that both men sustained gunshot wounds on the body.