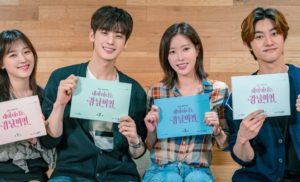 The cast of the ‘My ID is Gangnam Beauty’ had arrived in Cebu for a reward vacation following the success of their drama.

The lead couple in the drama — Astro’s Cha Eun Woo and Im Soo Hyang — arrived at the Mactan Cebu International Airport at around 11:30 p.m. on Friday night (October 19).

Cebuano fans were waiting outside the airport’s arrival area to catch a glimpse of the two celebrities.

Among them was 19-year old Sian Lim who waited outside the airport since 9:50 p.m.

If I only have the powers to make this ultraHD 🙃😂 this guy is soooo damn fINEEE!#MIIAGBinCebu #MyIDisAGangnamBeauty #ChaEunWoo #ImSooHyang #Cebu

“There were mga tarps and banners sa airport both for Eun Woo and Soo Hyang. Kalma din naman yung mga fans while waiting. Then screamed when they came out. Even airport staff — guards, porters, attendants were also waiting outside and inside of the arrival area,” she recalled.

Other cast members had arrived earlier around noon on Friday.

According to reports from Kstreet Manila, the actors and actresses from the drama were rewarded with a five-day-four-night vacation.

They will reportedly fly back to Seoul, South Korea on October 23.

Aside from its high rating, the drama was also praised for its critical approach on the emphasis on physical appearances and the true meaning of happiness and beauty in society through the life of Kang Mi Rae — the main lead who had undergone plastic surgery after suffering from bullying during her younger years.

My ID is Gangnam Beauty started airing on July 27 and wrapped on September 15.

Shems it looks like Eunwoo is having so much fun in Cebu…. ㅠㅠ💕

Metro Cebu now under Signal No. 3