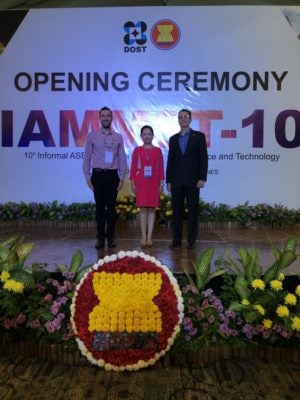 A Filipina scientist has bagged this year’s Asean-US Science Prize for Women, which focuses on precision agriculture.

This is the first time that the Philippines won in the Asean-US Science Prize for Women.

The applicability of Perez’ research, which focuses on using satellite data to forecast drought and generate ideal planting areas and seasons to improve crop yield, earned the nods of the judges of the competition.

“This technology will be useful for farmers so they can be advised early on where to plant and what to plant and if there’s drought, when to irrigate. We can also advise them to harvest earlier or plant earlier. These strategies can be better planned with an advisory system,” she said in an interview on Friday.

Dr. Perez is an associate professor from the Institute of Environmental Science and Meteorology at the University of the Philippines (UP) Diliman.

Her research started in 2013 and its first phase has been finished. Results have been turned over to the state weather bureau Philippine Atmospheric, Geophysical and Astronomical Services Administration (Pagasa) as well as the Bureau of Soils and Water Management (BSWM) of the Department of Agriculture (DA).

Dubbed as Drought and Crop Assessment and Forecasting (DCAF), Perez said the project has initially shown a 73-percent accuracy in identifying drought occurrences in their pilot areas.

Once this will be approved by Pagasa and the DA-BSWM, the technology can be integrated in these agencies’ advisory systems to help farmers across the country.

Now, they are working on the second phase of the project where they are collaborating with crop scientists and agriculture engineers to develop a more crop-specific approach in coming up with advisories that can be disseminated to farmers.

A total of 60 applications from the different member-countries of the Association of Southeast Asian Nations (Asean) were received for the competition, according to Ryan Washburn, head of the US delegation to the Asean Committee on Science and Technology.

It was then shortlisted to eight women scientists from the Philippines, Malaysia, Brunei Darussalam, Indonesia, Lao PDR, Burma, Singapore, and Vietnam.

Aziz is an associate professor at the Department of Biological and Agricultural Engineering at the Universiti Putra Malaysia. Her research focuses on computer science and electronics in agriculture, particularly in precision agriculture applications.

As runner up, the scientist from Malaysia received $5,000 in cash prize.

“We were most impressed by not just the groundbreaking research but how it is applicable to farmers in the region. We want research that does not just stay in the halls of academics, but its applied opportunity,” said Washburn, also the deputy mission director of USAID Indonesia.

He added that Perez’ ability to mentor other women in science and her efforts in promoting science were also major consideration to her win. 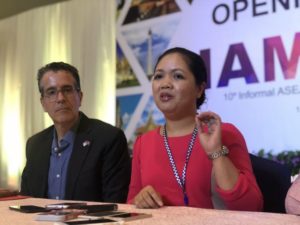 According to Perez, she was not expecting to win the competition especially after seeing the 3-minute video pitches of the other finalists which were well made and produced.

She recalled asking just one of her staff to help her put together an amateur video for her pitch.

“My background is in physics, far from agriculture. I didn’t know a lot about agriculture except for the rice that is on my plate,” she recalled in jest.

Prior to pursuing physics, Perez came from an all-girls Catholic school in Naga City, Camarines Sur.

She grew up admiring the feats and accomplishments of Filipino scientists through school magazines like Bato Balani.

After her years in UP, she became a postdoctoral fellow at NASA’s Goddard Space Flight Center Hydrospheric and Biospheric Sciences Laboratory in the US where she learned more about the immense data that could be culled from satellite images.

When she got back to the Philippines, she shared results of her research and started working on drought forecasting through the DCAF project.
Under the project, they can view different farm areas all over the country through satellite image enhanced by that of Philippines’ very own Diwata 1 and 2 satellites.

The technology can help them view areas up to the barangay level.

Perez said they hope to improve their data’s resolution to reach farm levels which are very small.

With the additional funding she has received from the US Government through the competition, Dr. Perez said she will continue enhancing their system.

They are also now working with state universities in Ilocos Norte, Nueva Ecija, Isabela, Bicol, Cebu, Iloilo, and Bukidnon to help them improve their data and validate their research results on field.

“I applied to the ASEAN-US Science Prize for Women because I feel that if I win the prize, I could serve as a role model to encourage more women to pursue scientific research,” Dr. Perez said in her 3-minute video introduction.

The ASEAN-US Science Prize for Women supports promising early-career scientists across the region and encourages collaboration between member states and the US in creating sustainable solutions to address development changes.

This year’s competition focused on precision agriculture, seeking to award those working at the intersection of agriculture, digital tools, technology and data in support of smallholder farmers and regional agriculture.

As Southeast Asia’s population continues to grow, so does the demand on the region’s food system and farmers. Experts believe that by 2050, about 40 percent more food will be needed to feed the region.

Other challenges like resource scarcity and extreme weather phenomena add to the problem.

Last year’s theme was on urban healthcare which was won by Vietnam’s Dr. Nguyen Thi Hiep.

According to Washburn, the theme for 2019 will be about the circular economy.

Read Next
Pagasa: ITCZ is gone but rains to continue