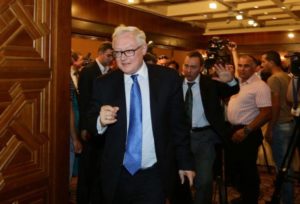 MOSCOW — Withdrawing from a Cold War-era nuclear weapons treaty with Russia as President Donald Trump has announced he plans to do is a dangerous step, Russia’s deputy foreign minister warned on Sunday.

“This would be a very dangerous step that, I’m sure, not only will not be comprehended by the international community but will provoke serious condemnation,” deputy foreign minister Sergei Ryabkov told TASS state news agency.

The treaty is “significant for international security and security in the sphere of nuclear arms, for the maintenance of strategic stability,” he stressed.

Russia condemned what he called attempts by the US to gain concessions “through a method of blackmail,” he added.

If the US continues to act “clumsily and crudely” and unilaterally back out of international agreements “then we will have no choice but to undertake retaliatory measures including involving military technology,” Ryabkov told RIA Novosti news agency.

“But we would not want to get to this stage,” he added.

On Saturday, Trump announced US plans to leave the three-decade-old Intermediate-Range Nuclear Forces Treaty, known as the INF, signed in 1987 by the then US president Ronald Reagan.

But Ryabkov on Sunday denied Trump’s accusations, throwing the accusation back at Washington.

“We don’t just not violate (the treaty), we observe it in the strictest way,” he insisted.

“And we have shown patience while pointing out over the course of many years the flagrant violations of this treaty by the US itself.”

US National Security Advisor John Bolton is set to arrive in Moscow on Sunday.

“We hope that we will hear from him during meetings, tomorrow and the day after, more substantively and clearly what the American side intends to undertake,” said Ryabkov.