SOLDIERS, KIN TO OWN LOTS AT LAST 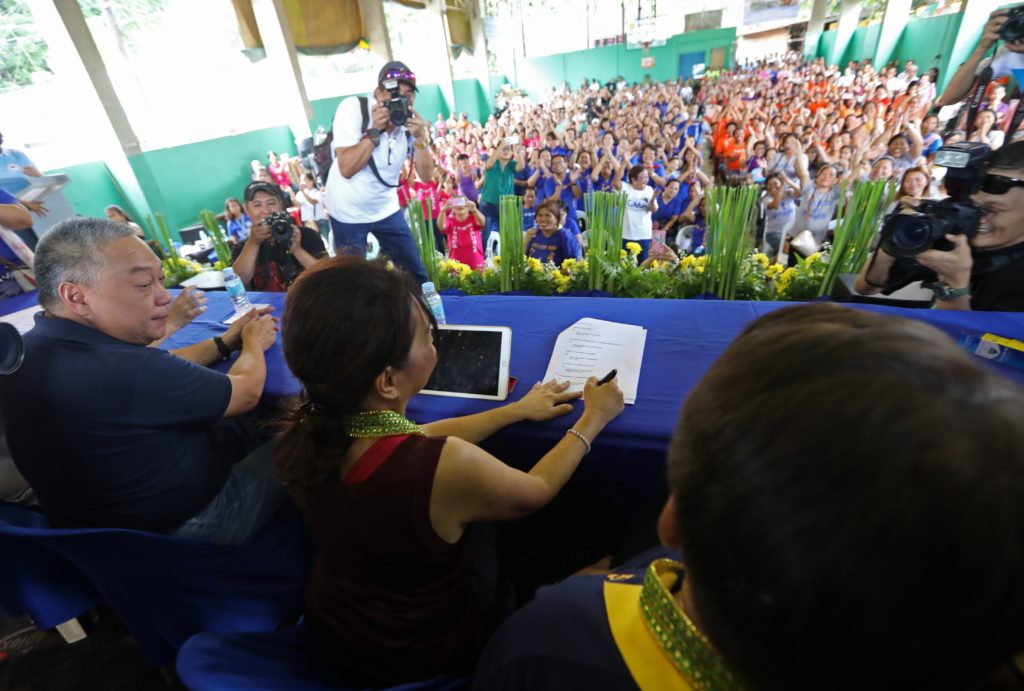 After over two decades of waiting, some 4,000 residents in seven sitios in the periphery of the Armed Forces of the Philippines Central Command (Centcom) headquarters in Barangay Apas, Cebu City will soon cease to be called “squatters” or “informal settlers.”

Paracuelles, a single mother, has been living in the area since 1984 along with her brother, Ecedito Paracuelles, a soldier in active service who is now on terminal leave. They were among the first residents who asked the government in early 1990s that they be allowed to buy the lots that they are occupying.

“Murag duol-duol na mi sa culmination sa among efforts nga nag-span ug 20 years (We are nearing the culmination of our efforts , which spanned 20 years). I started when my son was two years old. Now he is 26,” said Paracuelles.

Paracuelles is the president of the Alliance of Barangay Apas Community Associations, Inc. (Abaca), the federation of the families living in the 32-hectare province-owned land surrounding Camp Lapu-Lapu, Centcom’s headquarters.

The first victory, according to Paracuelles, was when then President Gloria Macapagal-Arroyo signed Presidential Proclamation No. 409 in June 2003, which declared the 18-parcel, 32-ha property as socialized housing sites under the provisions of the Urban Development and Housing Act of 1992 (UDHA).

When Arroyo signed PP 409, the lots, originally owned by Cebu province, were considered to be owned by the Department of National Defense (DND) since the lots has been donated by the provincial government to Centcom for its use.

The project, however, failed to materialize due to several setbacks, including the objection of then Gov. Gwendolyn Garcia, who had wanted to take back the property after she assumed as governor in 2004.

Over 15 years since then, Paracuelles and at least 4,000 other families living in Sitios Santo Nino, Mahayahay, Upper Panabang, Plaza, Central Apas, Rotunda and Calvary Hills received an early Christmas gift on Sunday.

This was after the local government units of Cebu City and Cebu province finally signed a compromise agreement on Sunday, Oct. 21, that would enable residents of the 32-ha property to own the lots they occupied. The residents are families of soldiers, former military men and their relatives.

Lorenzana, who was not present during the activity, was yet to sign the compromise agreement pending the issuance of the comment by Solicitor General Jose Calida.

Arroyo’s promise
The compromise agreement will serve as the settlement between the provincial government, the Abaca members and the DND.
Paracuelles recalled that when then President Arroyo placed the properties they occupied under the socialized housing program, it was under the presumption that the parcels of lots were owned by the DND. It turned out, however, that the province opted to exercise its right over the vast real estate. Moreover, then Defense Secretary Gilbert “Gibo” Teodoro also formally manifested his intention to return to the province the donated lots.

Even as Lorenzana has still to sign the compromise agreement, Paracuelles was hopeful that it would just be a matter of time before they would finally become landowners.

Arroyo, speaking after she witnessed the ceremonial signing, said she will do her best to help ensure that Lorenzana will sign the agreement.

The end is near
Once Lorenzana will approve the agreement, the province and the Abaca members will proceed to the appraisal of the lots.

Paracuelles, on the other hand, said that if the signatories for the compromise agreement have been completed, the same agreement will become the mother document.

“Then, there will be another legal document nga mao nay mag-embody sa pag-dispose sa mga yuta diri sa amoa (that would embody the disposition of the lots in our favor),” she added.

Paracuelles said they will be paying for their lots to the Cebu Provincial government through the community mortgage window of a social housing and finance institution.

Paracuelles said the development is a huge relief for them who are constantly in fear that they will lose their homes anytime.