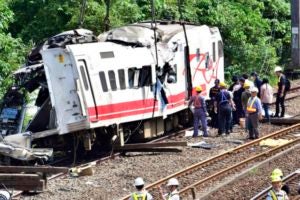 Workers survey the aftermath of a train derailment in Yilan county, northeastern Taiwan on October 22, 2018./AP

DONGSHAN TOWNSHIP, Taiwan — Taiwan’s president pressed for a quick, transparent probe into the cause of the island’s worst train crash in nearly three decades as the search of the derailed cars ended and crash investigators examined the wreckage Monday.

The eight-car Puyuma express ran off the tracks as it went around a bend where the maximum speed is 75 kilometers per hour. Video footage obtained by local media showed the train striking and toppling a beam and ripping down metal structures from above the tracks as it crashed.

Eu offered to resign Monday, an offer that is not unusual in Taiwan in such situations. It’s not yet certain if his offer would be accepted or if he would be asked to stay as the investigation continues.

Five people killed including a 9-year-old boy and a 12-year-old girl belonged to a single family. Three students and two teachers who died were from the same middle school.

The train had been carrying more than 360 passengers on a popular weekend route from a suburb of Taipei in the north to Taitung, a city on Taiwan’s southeast coast.

A 1991 train wreck killed 30 people, and Sunday’s derailment was at least the third deadly rail accident in Taiwan since 2003.

A tourist train overturned in the southern mountains in April 2011 after a large tree fell into its path. Five Chinese visitors were killed. A train undertaking a test run ignored a stop sign and crashed into another train in northeastern Taiwan in June 2007. Five people were killed and 16 others hurt.

And in March 2003, a train derailed near a popular mountain resort, killing 17 people and hurting more than 100 people. Investigators blamed brake failure.