City all set for All Souls and All Saints Day break 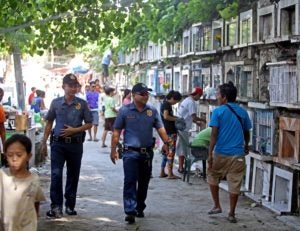 Police are seen roving inside the Calamba Cemetery in this CDN file photo. The same tight security measure will be applied this year during the All Saints Day and All Souls Day break. CDN FILE PHOTO

As most Cebuanos are expected to troop to cemeteries on November 1 and 2 to visit their dearly departed, the main concern of police and city officials would be on how to secure their homes against thieves and robbers.

Cebu City Councilor Dave Tumulak, the deputy mayor on police matters, announced on Monday that the city will be working hand-in-hand with the Association of Barangay Councils in Cebu City (ABC-Cebu City ) to allow the latter to deploy barangay tanods to watch over houses that will be left unattended by their owners.

(There should be people watching over their barangay, because we are worried that thieves and robbers would take advantage of the situation)

He also said that emergency measures are now being readied for the upcoming All Souls and All Saints Day.

Tumulak bared that at least 10 ambulances and nine firetrucks will be on standby should any contingency arise.

Tumulak also advised the public to make sure their homes are secured especially for those who are going home to the provinces.

The City Traffic Operations Management (Citom) will also deploy around 300 traffic enforcers to cemeteries in the city while a rerouting scheme will be implemented as early as October 31, 2018 to avoid traffic jams in the vicinity of large cemeteries.

The deployment of ambulances and firetrucks will also start on Oct. 31.

Francisco Ouano, operations head of Citom, said that all traffic enforcers will be on duty from Oct. 31 to Nov. 2.

According to Ouano, the area between the SM City Cebu and General Maxilom where the Queen City Memorial Garden and the Ludo Memorial Park are located, will be closed to public utility vehicles such as jeepneys, trucks, buses and vans.

Taxis however, are allowed entry but only to drop off their passengers.

Other areas that will be closely monitored according to Ouano are Barangays Carreta, Calamba and Talamban.

Taking all that into account, Tumulak assured that the city is ready for the All Souls and All Saints Day.

TAGS: All, All saints day, All Souls’, break, city, set