Social media in the spotlight in Brazil presidential race 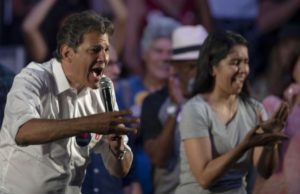 RIO DE JANEIRO, Brazil — Brazil, like other countries, is facing a very electronic election. WhatsApp, Facebook and Twitter are the weapons of choice to sway the country’s 147 million voters— and abuse of social media has been widespread.

Facebook and its WhatsApp messenger service — hugely popular in the Latin American nation— have been thrust into the spotlight for being used to traffick in disinformation.

The extreme-right frontrunner in the run-off election on Sunday, Jair Bolsonaro, has largely eschewed Brazil’s established media, preferring to woo voters online in a manner very reminiscent of US President Donald Trump.

Bolsonaro’s trailing rival, leftwing candidate Fernando Haddad, has raged against “fake news” and “lies” targeting him and his Workers Party, as

Bolsonaro’s support has grown into what looks to be an unassailable lead.

Surveys suggest Bolsonaro could pick up 59 percent of the vote, to 41 percent for Haddad.

If the race goes in that direction, Brazil — a country that threw off military dictatorship just three decades ago — will veer to the far right, under a president Bolsonaro vowing a relentless crackdown on crime and corruption.

This week, the 63-year-old former paratrooper, a pro-gun lawmaker backed by influential evangelical groups, warned the “red marginals” of the Workers Party “to get out or go to jail.”