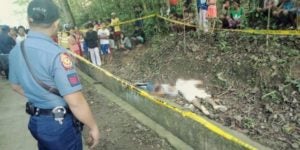 Two bodies were found along the roadside in Sitio Cambaye, Barangay Campo 8, Toledo City. The bodies were riddled with bullet wounds.
CDN PHOTOS/BENJIE B. TALISIC

But residents, fearing for their lives, did not go out of their homes in the wee hours of dawn yesterday to investigate.

When the sun rose, two dead bodies riddled with gunshot wounds, whose faces were covered with t-shirts, were found along the roadside in Sitio Cambaye.

Family members later identified the victims as Jonel Abatayo, 23, and Abelardo Salumag, 44, who are both from Talisay City.

Supt. Randy Korret, chief of the Toledo City Police Station, said that the two men have pending carnapping cases, which they suspect, could be the reason behind their killing.

Korret said that the two were recently released from detention after a man, who accused them of stealing his motorcycle, opted not to pursue the filing of a case against them.

But Evelyn Abatayo, Jonel’s mother, said that she intends seek the help of the Commission on Human Rights in Central Visayas, as she suspects that policemen are behind his son’s death.

He was allegedly involved in the theft of a motorcycle in Lapu-Lapu City which was brought to Talisay City for dismantling.

The motorcycle was allegedly found in the house of Salumag.

Korret said that a concerned citizen called police to inform them of the discovery of the bodies at around 7 a.m. yesterday.

Six empty shells and one live bullet of undetermined caliber were found beside the bodies.

Korret said that initial information which they gathered from residents showed that the gray car came from the vicinity of the neighboring Barangay Campo 7 in Minglanilla town.

The first victim is about 5’2″ tall and of medium built, wearing a white T-shirt with “Jeam SEMY Forever” print at the back, and gray short pants.

His head was wrapped in a white cloth.

The second victim is about five feet tall and of small built.

He was wearing a blue sleeveless T-shirt with “OUT LIF” print on the front, gray short pants and a pair of green slippers.

A gray T-shirt was wrapped around his head.

Read Next
City prepares for relocation of 30 families in Buhisan