City prepares for relocation of 30 families in Buhisan 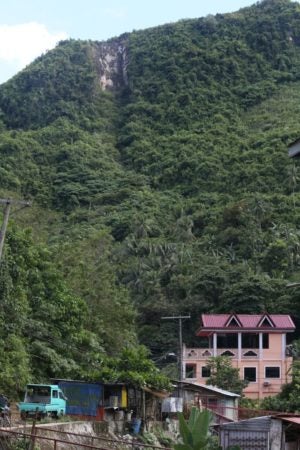 The large crack seen on the top right of the mountain in barangay Buhisan has caused concern. Relocation for at least 30 families living nearby, is being prepared by the Cebu City government.

At least 30 families living near the cracks in a mountain area of Sitio Sandayon, Barangay Buhisan will be relocated to safer areas.

Cebu City Mayor Tomas Osmeña said on his Facebook page that they are now looking for possible relocation areas for these families.

“The process of relocating the Buhisan residents who are in proximity to this crack has begun. We are coordinating with Barangay officials to make the moving of the 30+ families as painless for them as possible,” the mayor said in his Facebook post.

Barete said that there is a house and lot owned by Osmena’s Executive Assistant Bimbo Fernandez in Tubod, and a private lot in Dulhugan.

The Cebu City Disaster Risk Reduction and Management Office (CCDRRMO) is assessing the area to determine if it safe to relocate the residents.
CCDRRMO head, Nagiel Bañacia, said they have not yet been told of the proposed areas for relocation.

Barete said the final decision will come next week, following the report of the Mines and Geosciences Bureau in Central Visayas (MGB – 7).

These recommendations included monitoring of the area, especially those near the slopes of where the cracks were found, the evacuation of the residents and making the area a no – build zone.

On October 18, Buhisan barangay officials reported the cracks found in the mountains above Sitio Sandayong.

Barete said the cracks were first discovered during the 7.2 magnitude earthquake that struck Central Visayas in 2015.