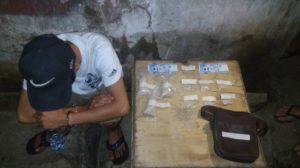 Drug suspect Mark Alger Romarate covers his face as he is asked to be seated beside the table where the sachets of shabu seized from him are being laid out and marked on Oct. 27, 2018.

Despite numerous police operations, illegal drugs continue to thrive on the streets of Cebu.

The last two days were no different. In a span of just six hours between late Friday to early Saturday, P9.8 million worth of illegal drugs were seized by policemen in separate drug busts in Cebu City.

The first operation led to the arrest of motorcycle-for-hire driver who was caught selling shabu (crystal meth) worth P6 million in Barangay Kalunasan, Cebu City, at past 9 p.m. on Friday.

Jomarie Castro, 24, admitted possessing the drugs but said he was only instructed by someone to give it to another person.

Six hours later, or at around 3 a.m. on Saturday, another suspected drug peddler was arrested in Pardo, Cebu City, for purportedly selling P3.8 million worth of shabu.

She said they already expected that the police will continue to confiscate millions of pesos worth of shabu in the city.

Garma earlier believed there is a “bodega” or warehouse of shabu in Cebu and these supplies of drugs are imported.

The director said that there is also a possibility that some supply of drugs in the city could have come from the supposed P11 billion worth of shabu smuggled through the Port of Manila, under the nose of the Bureau of Customs.

“You asked me why (illegal drugs continue to thrive on the streets)? Kasi may market eh. Tapos may nai-import pa diyan, gaya ng nangyari sa Customs. Meron pa talaga diyan (on the streets),” said Garma in an interview with CDN.

The Philippine Drug Enforcement Agency (PDEA) earlier released data that showed the large amounts of shabu seized across the country had the same “synthetic impurities” and “production method” as the illegal drug intercepted at the Manila International Container Terminal in August.

Garma admitted that she, too, could not understand the continuous supply of shabu in Cebu amid their relentless anti-narcotics operations.

The city police director said they are conducting an investigation on the supply of drugs in Cebu.

Castro was arrested after the operatives from drug enforcement unit of the Guadalupe Police Station successfully transacted with him.

Bilibli said that they came across the information on the involvement of Castro in the illegal drugs trade after their operation last week.

(We apprehended some persons last week and the name of Castro surfaced as one of the sources here in Barangay Kalunasan.)

The drug suspect was already bringing a big backpack, where the P6.018 million worth of shabu was found by the police operatives, during the buy-bust operation.

In an interview with CDN, Castro denied that he was peddling shabu, claiming that he was only serving as a drug courier.

He said that he was only tasked to hold the 510 grams of shabu before giving it to another person.

But Bilibli said that Castro is a newly identified drug personality in the barangay, and they are still digging into his past and the extent of the drug suspect’s distribution network of illegal drugs.

(We do not have more information about Castro’s illegal activities. But we found out that he is the son of the tombstone maker who was earlier arrested.)

Castro is the son of tombstone maker Joel Castro, 44, who was arrested during a drug bust inside the Carreta Cemetery in Cebu City last June 12.

The police were able to seize 19 medium packs of suspected shabu worth P5,605,000 from the older Castro.

“We got a tip from one of Romarate’s neighbors about his illegal activities in their place,” said Maramag.

Maramag said the informant allegedly saw some of the drug suspect’s transaction at their neighborhood in Sitio Fatima.

He added that the informant expressed concerns over their security due to the illegal transactions happened in their area.

This prompted the person to tip off the police about the illegal activities of Romarate.

Romarate was also a newly identified drug personality, according to the police.

But the drug suspect denied all accusations against him.

The police operatives, however, said they were able to confiscate P3.8 million worth of shabu from Romarate.