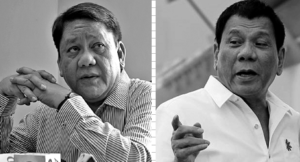 In a speech during a “private dinner” with his allies from PDP – Laban in Cebu last Tuesday evening, the President ordered Interior and Local Government Secretary Eduardo Año to press charges against Osmeña.

This despite the charges already filed by the Cebu City Police Office (CCPO) of abuse of authority, conduct unbecoming of a public official and obstruction of justice against the mayor before the Office of the Ombudsman last September.

The President’s statements against the mayor were made during the dinner where some of Osmeña’s critics and political enemies were present.

“Nasuko gyud ko kay naa nay preso, iyahang gi adto sa station gikasab-an niya ang police, giparelease niya (I was really angry because there are detainees. He went to the station to reprimand the police, and then he released them),” said Mr. Duterte.

CDN left a text message in Osmeña’s inbox yesterday but there was no reply as of press time.

In his nine-page reply to the anti-graft office last October 26, Osmeña denied these allegations.

He also denied that he ‘sternly warned’ the police if they would object to his question if he could take the suspects under his custody instead.

The mayor asked the Ombudsman to dismiss the charges against him.
Osmeña, through his lawyer, said none of his actions on August 24, as well as the affidavits of the police officers, are enough to prove he violated the law.

“Respondent states that this complaint is liable to be dismissed at the very outset because the allegations do not contain any averments that would constitute the elements the crime of obstruction of justice,” portions of his answer read.

“There was also nothing in respondent’s actions that indicated misconduct or that he was abusing his authority as city mayor. The truth, he was merely responding to a request for assistance by his constituents who reported to him about the illegal arrest of the vendors and the illegal seizure of butane canisters,” it added.

Read Next
NSC prepares against narco-politics