Duterte to name, campaign for ‘corrupt-free’ bets in 2019 polls 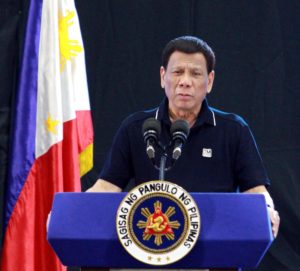 President Rodrigo Duterte will campaign for corrupt-free candidates in the 2019 midterm elections and is set to announce his choices after Christmas Day.

“So I will campaign for – not now, maybe after Christmas – then I will announce my choices, who those people are,” Duterte said in a speech in Cagayan de Oro on Wednesday, where he led the distribution of Certificates of Land Ownership Award (CLOA) to 3,400 agrarian reform beneficiaries.

He said he would “come up with a list,” assuring the public that he would “choose people well.”

The candidates he would support, he said, must be competent and honest.

“I told them that I only have one requirement. Competence and if you have the capability and if you are honest. That’s my only requirement. That’s a standard for all of them to follow. Never make a mistake with corruption,” he said.

“That’s what I said. I will support you as long as you are not corrupt and if you have the capacity,” he added.

The President reiterated his reminder to the police and the military, including government officials not to engage in partisan politics.

“They can campaign for me, but I told them not to. Don’t. That would be complicated because you’ll be using government-owned vehicles and planes,” he said.

But he said he would be actively campaigning for his choices in next year’s elections.

“Just let me be because I am President. I’m just one person after all. And the President is always a politician because he is elected by the people,” he said.

Duterte, whose term ends in 2022, said the Presidency would be his last political office.

“But me, I am tired. This is my last and I will not tinker with politics anymore. Maybe for now I’ll just pay my debt of gratitude to the people who helped me,” he said.

Duterte is the chairman of the Partido Demokratiko Pilipino–Lakas ng Bayan (PDP-Laban).

Read Next
Duterte maps out security plans against Reds