US voting officials under scrutiny amid heavy turnout 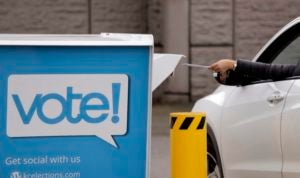 A driver drops a ballot into a drop box at the King County Elections office Monday, November 5, 2018, in Renton, Washington. /AP

ATLANTA — Federal and state officials have been working for nearly two years to shore up the nation’s election infrastructure from cyberattacks by Russians or others seeking to disrupt the voting process.

It turns out that many of the problems are closer to home.

Early voting leading up to Tuesday’s midterm election revealed a wide variety of concerns with voting and registration systems around the country — from machines that changed voter selections to registration forms tossed out because of clerical errors.

Election officials and voting rights groups fear that voter confidence in the results could be undermined if such problems become even more widespread on Election Day, as millions of Americans head to the polls to decide pivotal races for Congress and governor.

Already there is concern that last-minute court rulings on voter ID requirements, the handling of absentee ballots and other issues in a handful of states will sow confusion among voters and poll workers.

“We expect poll workers will be overwhelmed, just as voters are overwhelmed, and there will be lots of provisional ballots,” said Sara Henderson, head of Common Cause in Georgia, where voting-rights groups have been raising numerous concerns about election security and voter access.

The problems come amid a surge of interest, with registrations and early-voting turnout running well ahead of what is typically seen during a midterm election.

Read Next
A thing of beauty

TAGS: amid, heavy, officials, scrutiny, turnout, under, US, voting