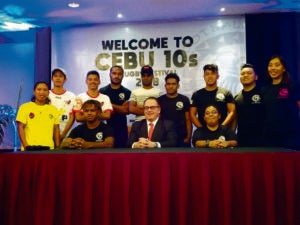 Competition expected to be tough with presence of team from China

Expect stiff competition in the 11th Cebu 10s International Rugby Festival as a team from China will be competing in the tournament that starts this Saturday, November 10, at the Cebu International School in Pit-os, Cebu City.

The tournament will feature around 250 rugby players coming from five countries, including the Philippines.

Defending champions Rhinos RFC of Hong Kong will be back and are eager to retain their title while the four-time champions Alabang Eagles are keen to wrest it back.

Also making the tournament more exciting is the presence of a team from China, the Changzou Giants.

“We are expecting them (China) to also advance to the finals so we don’t really know (who will win),” said Maggie Royo, one of the organizers, during the press launching of the tournament on Tuesday afternoon at the Marco Polo Hotel.

Leading the local charge are the host team Cebu Dragons, who promised that they have a better team this year that can seriously vie for the Dragon Cup.

“We are stronger this year because we have stronger players and we can really vie for the title,” said Christian Buscas, one of the members of the Cebu Dragon.

According to Buscas, the only challenge is the team’s chemistry, considering that most of the members are new. The team only has four local members, the others being players from Papua New Guinea who are here in Cebu to study.

“But, aside from individual strength, we are fast-paced and we have the heart. The players from Papua new Guinea are also proud to represent Cebu,” added Buscas.

Initially, 15 teams will be seeing action but the Dadiangas Generals have canceled their participation due to budget constraints.

For the first time also, the draw by lots of the teams into three pools will be done this Friday during a meet-and-greet of players. In previous outings, the draw is usually announced during the press launching.

Another first will be the holding of a beach rugby on November 11. Previously, beach rugby is always played in Boracay but with its closure, Cebu 10s organizers have decided that holding one here is a good way to showcase the beaches of Cebu. It will be held at the Maribago Bluewaters.