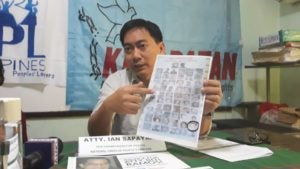 Fearing for their safety, the camp of Mabinay 6 is now planning to request the Supreme Court (SC) to transfer the venue of their hearings from Bais City, Negros Oriental to Cebu City.

This developed after one of their lawyers, Benjamin Ramos, was shot dead by still unidentified assailants in Kabankalan City, Negros Occidental on Tuesday evening (November 6).

“We are now constrained to request the Supreme Court to transfer the venue of the hearings from Bais City to Cebu City. Basin inig tunob balik namos Negros, mamatay nami,” said lawyer Ian Sapayan, counsel for the Mabinay 6.

Sapayan added they filed a motion to allow the Mabinay 6 to post bail. The hearing of the case has started three weeks ago.

“Attorney Ben was set to cross-examine the final witness this November 21,” he said.

Sapayan told members of the media in a press conference on Wednesday (November 7) that they suspected the motive of killing Ramos was in relation to the cases he handled.

He also said Ramos’ death could be a case of “state-sponsored killings”.

The wake of the lawyer, according to Sapayan, will be held in Kabankalan City, Negros Occidental.