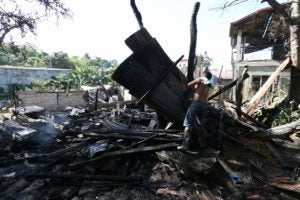 A total of nine houses were razed by fire in Sitio Sugarland, Barangay Bacayan, Cebu City at around on Friday midnight (November 9).

Fire Chief Insp. Noel Nelson Ababon of the Cebu City Fire Department said the fire alarm was raised into third alarm due to its remote location. Bacayan is among the mountain barangays in the city.

Ababon said the fire started in the house of a certain Artemio Borgonia.

Authorities estimated the total damage at around P200,000. They have yet to identify the cause of the fire.

Read Next
Coastguard rescues vessel in waters off Talisay City