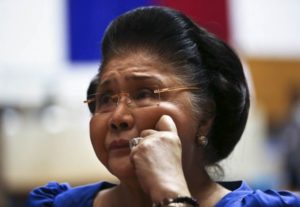 Former First Lady and Ilocos Norte Rep. Imelda Marcos has been found guilty of seven counts of graft by the Sandiganbayan’s Fifth Division.

According to a decision by the anti-graft court yesterday, Marcos is sentenced to imprisonment of from six years and one month, up to 11 years for each count, for violating R. A. 3019 or the Anti-Graft and Corrupt Practices Act when she transferred around $200 million to seven Swiss foundations during her term as a member of the defunct Batasang Pambansa and as then Minister of Human Settlements.

Associate Justice Rafael Lagos of the Sandiganbayan’s Fifth Division also ordered the arrest of Marcos, whose camp did not attend the legal proceedings.

She was given 30 days by the anti-graft court to explain her absence.

She can still post bail for her temporary liberty as graft is a bailable case, the amount however, has yet to be set by the court.

If the Sandiganbayan’s decision is ruled with finality, she will be perpetually disqualified from holding any public office, although she can still continue her gubernatorial bid in Ilocos Norte as her camp can still file a motion for reconsideration.

According to Quilala, Mrs. Marcos, along with her late husband former President Ferdinand Marcos, allegedly took part in managing Swiss foundations which was disallowed by the 1973 Constitution.

Mrs. Marcos yesterday said her camp “intends to file a motion for reconsideration” on the Sandiganbayan’s guilty verdict against her on seven counts of graft.

“We have just received a copy of the Decision of the Sandiganbayan’s 5th Division which was promulgated on November 9, 2018,” Marcos said in a statement.

She said her lawyer Robert Sison has been indisposed and is presently confined at the Asian Hospital so Atty. Lolong Lazaro would act as her counsel in the interim.

“He is presently studying the decision and has advised us that he intends to file a Motion for Reconsideration,” said Mrs. Marcos.