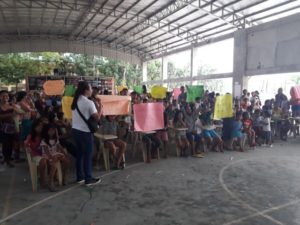 No matter how small the help is, it will really go a long way to make people happy.

As an old saying goes, birthdays are blessings that need to be shared.

For Kate Uy Estrera, nothing rang more true than these words when she marked her 25th birthday last Sunday, November 4.

The young businesswoman decided to hold a children’s party for victims of the Naga City landslide at the Naga Central Elementary School (NCES), where most of the children of the landslide-stricken areas were evacuated.

The school has over 563 children evacuees. Of the number, 24 are infants.

“It’s best to share my blessings with the kids,” said Estrera, owner of a small food franchise in Cebu City. 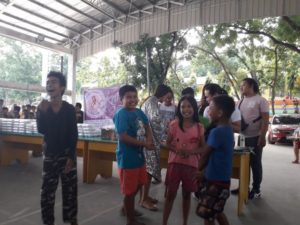 With the help of her friends, a private charity group and her business contacts, she gathered all the children in the NCES covered court.

The program started with a prayer at around 3:30 in the afternoon followed by parade skits performed by Cebu comedy groups Chipiwiwit Divas and Team Saxoni.

Through a friend, Estrera was able to tap the entertainment groups to host the children’s program.

The hilarious performances, which included a parody of the famous Disney-hit song “Let it Go,” and The Greatest Showman pop ballad, “Never Enough,” drew laughter from the children and the adult spectators.

A bubble show also brought a spark in the eyes of the children as colorful bubbles danced in the air.

Parlor games and kids’ prizes also added to the fun with parents of infants holding on to their children enjoying the spectacle.

Estrera, a resident of Talisay City, told Cebu Daily News that she first found out about the landslide through social media.

“When I first heard about it, I really wanted to come; but I was very busy at the time. So I decided to come here on my birthday,” Estrera said in Cebuano.

The entire party cost her about P40,000 with more than 600 food packs and several prizes prepared.

As a way to thank her, the children presented banners greeting Estrera a happy birthday and thanking her for the generosity. 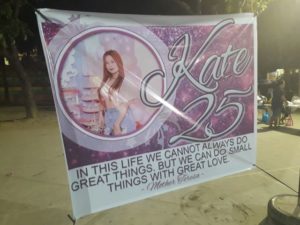 Even with what she considers as her “small contribution,” she saw contentment in the children’s eyes.

“No matter how small the help is, it will really go a long way to make people happy,” Estrera said.

In the early morning of September 20, 2018, reports of a massive landslide in Barangay Tinaan, City of Naga jolted Cebu.

The disaster claimed the lives of 77 while 450 families were left homeless.