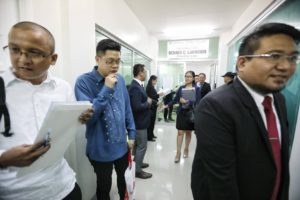 Counsels for Apo Land Quarry Corp. and the Naga families who filed a case against the company, are seen at the sala of Judge Dennis Larrobis of Talisay City Regional Trial Court on Wednesday. Larrobis later inhibited from the case.
CDN PHOTO/TONEE DESPOJO

Apo Land and Quarry Corp. (ALQC) has submitted its opposition to the issuance of a temporary environmental protection order (TEPO) in relation to the P4.5 billion environmental case filed against them over the massive landslide in Barangay Tinaan in Naga City in southern Cebu.

ALQC filed the 18-page response to the TEPO before Branch 65 of the Talisay City Regional Trial Court in the afternoon of Wednesday, November 14.

ALQC, in its opposition, argued that the TEPO issued by Naga City RTC Branch 76 Judge Dennis Larrobis last Friday was invalid as it allegedly lacked contemporaneous service of summons and the copy of the actual complaint when it was served by one of counsels of the plaintiff shortly before their office closed on the same day.

Chito Maniago, spokesperson of Apo, said in previous interviews that they only received the Tepo, brought by the plaintiffs’ counsel, Atty. Xzajyk Caing, a “couple of minutes before 5 p.m.”

ALQC’s camp earlier asked Judge Larrobis to inhibit from hearing the case because of his discussion with Caing on serving the case and his alleged closeness with the plaintiffs’ lead counsel, lawyer Bejamin Cabrido.

Larrobis already inhibited from the case but explained in his recusal order released on Wednesday that the service of the TEPO is valid following the rules of court and the conversation he had with Caing was not in any way private or tainted with prejudice to the case.

But ALQC maintains that even if the TEPO is valid, it lacks merit on the basis of urgency considering that a cease and desist order from the city government of Naga exists coupled with the temporary cancellation of ALQC’s Environmental Compliance Certificate by the Department of Environment and Natural Resources.

“In the light of the foregoing suspension orders /cease and desist orders and in faithful compliance therewith, ALQC has not resumed quarry operation since the landslide incident occurred [on September 20],” an excerpt of ALQC’s opposition read.

ALQC also questioned the validity of the application of the Environmental Protection Order stipulated in the main class suit.

The EPO asked by the plaintiffs seeks to cease all operations of Apo in all of its seven Mineral Product Sharing Agreement (MPSA) tenements, including those outside Naga City, when the tension cracks found by geologists only covers three of its MPSAs as only five barangays of Naga City have been found to be in imminent danger.

“Considering that the alleged cracks are found in an area covered by MPSA Np. 286-2009-VII … the issuance of a TEPO on all of its seven MPSAs covering 2,881.406 hectares of land and covering areas outside Naga City, is evidently without factual and logical basis,” ALQC’s opposition read.

ALQC earlier admitted financial instability after stoppage of operation for over 50 days now.

The company, on Tuesday, has announced their decision to temporarily lay off 30 percent of their regular employees and reduce the headcount of their contractors by 40 percent.

The employees staged a rally on Wednesday in front of the Naga City Hall asking the city government to help them keep their jobs by letting Apo resume its operations.

Meanwhile, an environmentalist group believed that the lay off was only a “corporate strategy” made by the company.

“The recent Apo Land and Quarry Corporation (ALQC) decision to lay off some employees is a tragic development on the lives of the working people, and the employees must not be held hostage by this kind of corporate strategy,” Pusyon Kinaiyahan said in a statement sent to Cebu Daily News on Wednesday.

“Our call is not intended to put the ALQC-supported families out from their jobs, but rather to make the Apo Land and Quarry Corp. (the provincial and local government, and the DENR-MGB) accountable of the greater and oppressive damages they have done to the 78 people who perished, the mountains and the displacement of communities around Naga City due to quarrying operations; and also for the ALQC to strategize and shift to sustainable and eco-friendly approaches benefiting our environment and our communities towards sustainable economic growth — which we believe is possible,” the group’s statement further read.

Read Next
Local rice retailers worry about SRP on rice