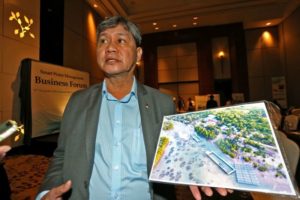 Sta. Fe Mayor Jose Esgana shows an artist perspective of the floating solar power plant project which will be built off the shoreline of the town’s Barangay Balidbid.

Kim Minjae, general director of water industry platform center of K-Water, said that in investing in Cebu they would be helping Korean businesses access a new market and at the same time help local government units to implement new technologies in water management.

In fact, one project is already being implemented by K-Water together with its local partner Xced Enterprises in Cebu.

The project is a 50-kilowatt floating solar power plant off the shoreline of Barangay Balidbid in Santa Fe town in Bantayan Island in northern Cebu.

According to Santa Fe Mayor Jose Esgana, the project is still part of a study and assessment on its feasibility by K-Water and Xced.

“With this kind of technology, we can make use of our surface water to put up solar power plants so we do not have to clear farms and fields just to establish solar plants,” he said.

Xena Joy Cruz, Xced Enterprises proprietress, said that the cost of the project was estimated at P20 million.

Mayors from towns like Madridejos, Tudela and San Francisco in Camotes Island, as well as Tuburan were present during yesterday’s forum.

The mayors and other town officials were able to talk and network with some of the Korean companies present during the forum including Hydronet, Jain Technology, Midni, Usol, Scotra, and Grenex Corp. among others.

Esgana said the Korean government would offer a lot of official development assistance (ODA) for projects that could be implemented in localities in Cebu.

He said that once a proper agreement would be made, the Korean government could bring in new technologies into Cebu towns for free, or for a certain counterpart cost on the local government, depending on the size of the project.

Yesterday’s forum was organized by Xced Enterprises and K-Water.

Xena Joy Cruz, said they wanted to bring in more investments in smart water management in Cebu through K-Water.

She said their objective was to invite mayors from different areas and identify water management problems wherein these technology providers can come in.

They will then assist them in doing site inspections and finding out the feasibility of projects in these areas.

“K-Water is a government agency. They said that they want to focus on Cebu. So we want more projects to be identified here,” she said.